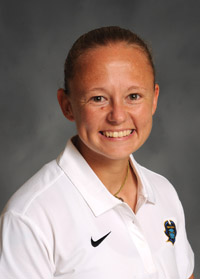 Debs Brereton enters her fifth season an assistant coach on the ETSU women's soccer coaching staff after being introduced on June 2, 2011.

In three seasons, Brereton has helped the Bucs combine for a 41-23-3 record, including three postseason berths in 2011, 2012 and 2014. In 2012, Brereton helped coach the Bucs to their second consecutive 12-win campaign, tying the program mark for wins in a single season for a second time straight season. In 2014, Brereton topped that record by winning a program best 15 games. In January 2015 Brereton successfully completed the United State Soccer Federation (USSF) "A" License.

In her first season at ETSU alongside head coach Adam Sayers (2011), the Bucs posted a 12-5-1 overall record as well as a 7-1-1 mark in Atlantic Sun matches. The 12 overall wins and seven conference wins both tied the program record for wins in a season, while the team netted a program best 43 goals en route to its first ever regular season championship.

During the summer of 2013, Brereton was selected as a participant in the inaugural year of the NSCAA's "30 Under 30" program. Brereton was selected from a field of more than 350 collegiate coaches as one of 30 individuals in the nation to participate in the year-long mentorship program aimed at fostering the growth of up-and-coming coaches.

Prior to joining the Buccaneers, Brereton spent three seasons as a graduate assistant on the women's soccer staff at Middle Tennessee State University. While working on the Blue Raider staff, Brereton helped guide the 2010 team to the program's first ever Sun Belt Tournament Championship and NCAA Tournament appearance.

Brereton was also a player/coach for the Fort Wayne FC, located in Fort Wayne, IN. She participated in the Midwest-South division of the WPSL in 2010 and helped Fort Wayne advance to the playoffs for the first time in club history. Through eight games, Brereton managed to net four goals and tally three assists, as well as make a WPSL team of the week in June of 2010.

Prior to accepting the GA position at MTSU, Brereton served as an assistant soccer coach at Christian Brothers University in Memphis, Tenn., for the 2007 campaign.

Brereton played three seasons in the W-League and the WPSL prior to starting her coaching career. She led the San Diego Sunwaves to the W-League Western Conference Championship in 2007 with an 8-3-1 record. While in the WPSL, Brereton led the Tennessee Lady Blues with seven goals in six matches in 2006, helping them finish second in the Midwest Division. In 2005, she scored three goals in two games for the W-League's Hampton Roads Piranhas before suffering a season-ending injury.

Brereton’s collegiate career saw her play just one season for MTSU, in 2004, after transferring from Northeastern State; however, that one season proved to be one of the greatest in program history. She became the program's first Sun Belt Player of the Year after setting what was then the school record for goals in a season with 19. She also set the then-single-season points record with 47 and tallied nine assists to rank fourth on the single-season chart. Though she played for just one season at MTSU, Brereton is still among the career leaders in points and goals, ranking ninth in each category.

Her strong play also helped lead MTSU to a share of the 2004 Sun Belt regular-season championship, its first conference title. She was later named to the Sun Belt's 30-year Anniversary Team and earned a spot on the Soccer Buzz All-Central Region Team.

Brereton completed her eligibility at MTSU in 2004, earning her B.S. in physical education in 2005. In the spring of 2011, she earned a Master of Science in Health and Human Performance with a concentration in Recreation from MTSU.