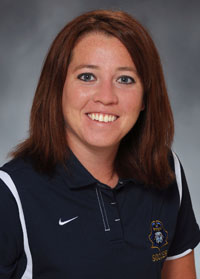 Kristi Evans enters her second season as an assistant on the ETSU women's soccer coaching staff.

Evans' primary responsibilities include the planning and coaching of training sessions, game-day traveling and recruiting trips. She also assists with the implementing of team tactics and video breakdown and analysis.

This past summer, Evans has been working with the Olympic Development Program (ODP) Region III Camps. She also received her NSCAA National Diploma this past January.

Prior to ETSU, Evans spent the 2009-10 season as an assistant coach with Alma College where she helped with training and recruiting while working with the goalkeepers.

In addition to coaching at Alama College, Evans also coached the U-10 and U-11 TNT Dynamite club teams and the Lasher High School girls team. Evans earned her Coaching D Liscense in June of 2008 and NSCAA Level I & II Goalkeeper Diplomas in 2010.

A standout at Oakland University, Evans was named team captain from 2006-08. While playing for the Golden Grizzlies, Evans received first-team all conference honors in 2006 and 2008, and was also named to the Summit League All-Tournament Team in 2007 and 2008. Evans helped guide Oakland to four Summit League Championships and two NCAA tournament appearances in 2006 and 2007.

Evans graduated with a B.S. in Wellness, Health Promotion and Injury Prevention from Oakland University in 2010, and is working towards a masters in sports administration degree at ETSU.