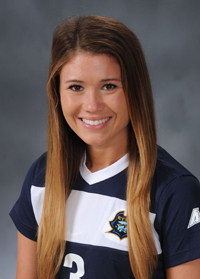 2010: Played in 13 of 18 contests her freshman season while compiling four shots … played in eight of ten Atlantic Sun conference games … saw her first collegiate soccer action and took her first shot as a Buc in a 4-1 victory at UNC Asheville (Aug. 22) … played in her first Atlantic Sun contest and blasted a career-high two shots as part of a, 2-0, shutout of Campbell (Sep.18) … took one shot in a, 1-0, defeat to FGCU (Oct. 8).

Prior to ETSU: A four-year letterwinner for head coach Molly Wilson at Ensworth High School… over her four-year career, Vaughn led Ensworth in goals and assists… played club soccer for coach Chris Price and the Brentwood Premier ’92… led Brentwood to three straight state finals, where they were crowned champions in 2003… also earned state runner-up honors in 2004 and 2005… participated in the Tennessee Olympic Development Program for two years, where she made the state team… in addition to soccer Vaughn lettered in softball, cross country, track and basketball.