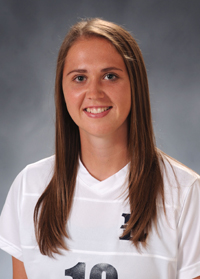 2011: Played and started in seven games, logging 551 minutes of playing time… took nine shots, landing two on goal… made her ETSU debut and first collegiate start in the season opener, taking her first shot and shot on goal as a Lady Buc against Wofford (Aug. 19)… put together her first multi-shot game, taking a season-high two shots in a 1-0 defeat of Radford (Aug. 28)… fired two shots in ETSU’s 2-1 win against Wright State in the RedHawk Shootout (Sept. 9)… played a season-high 108 minutes, taking two shots on the road at Winthrop (Sept. 17)… took one shot in her Atlantic Sun debut, starting and playing 26 minutes before suffering an injury which sidelined her for the rest of the season (Sept. 23).