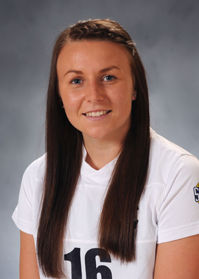 2014: Scored goals in each of ETSU's first six matches, all wins, helping the Bucs to their best start in program history... Scored game-winners in back-to-back, double overtime wins, Aug. 28 and Aug. 31, versus Appalachain State and Campbell, respectively... Recorded three goals and one assist in ETSU's record-breaking, 12-0 victory versus Alabama A&M... Scored a goal and dished out an assist in ETSU's 5-1 win at Tennessee Tech ... recorded four three-goal games on the season ...  single season record for most points (62) and goals (27)

2013: Emerged as a versatile two-way defender in her sophomore campaign, scoring four goals and dishing out four assists, earning a spot on the Atlantic Sun All-Conference First Team... One of just five players to play more than 1,000 minutes in both 2012 and 2013.

Prior to ETSU: Represented England in the European Championship Qualifiers at both the U17 and U19 levels... scored her first international goal by heading in a corner in 2010... played for Bristol Academy from 2008-09, Arsenal Ladies from 2009-11, and Barnet Ladies from 2011-12 at the club level... helped the Barnet Ladies defeat Queens Park Rangers 2-1 in the Final of the Middlesex County FA Women's Senior Cup to claim the County Cup in 2011-12.