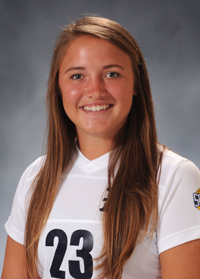 Prior to ETSU: Transferred to ETSU from the University of San Francisco... spent two seasons with the Dons, using her medical redshirt after suffering an injury during her first year... played for head coach Jeff Gambe at Lake Travis High School in Austin, Texas... led her squad to two District Championships and an appearance in the 2009 Sectional Finals... was named First Team All-District her junior year, following that up with a Second Team All-CenTex selection and Defensive MVP honors in 2010... played for the Lonestars '92G White Team at the club level... was team captain and led the team to a 2007 Orange Classic Championship and 2008 runner-up finish... a three-time Academic All-District member... named Academic All-State as a senior.