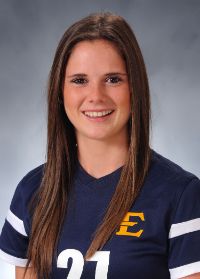 2014: Matched her own single-game record of four assists Sept. 2 in the Bucs' 6-1 win versus South Carolina State, in which she also scored a goal... Recorded three assists in ETSU's record-breaking, 12-0 victory versus Alabama A&M... Scored a goal in ETSU's double overtime win versus Campbell Aug. 31... Dished out an assist Aug. 24 in the Bucs' 5-1 win versus Tennessee Tech ... two goals, one assist at Samford (10/3) ... Holds single-season record for assists (20) .... Career-leader at ETSU in points, assists and shots attempted.

2013: In 2013, Zadrazil improved upon her stellar freshman campaign, scoring eight goals and dishing out 11 assists during her sophomore season. With 21 assists, Zadrazil ranks second on ETSU’s all-time list for career assists. She has accumulated a wealth of international playing experience, competing with Austria’s U17, U19, and Senior National Teams, serving as captain of the U19 team.

2012: The St. Gilgen, Austria, native tied ETSU’s single-season assist record as a freshman, dishing out 10 assists and scoring four goals en route to helping ETSU to its second consecutive 12-win season. The Atlantic Sun Freshman of the Year, Zadrazil acted as a catalyst for the Buccaneers’ offense that featured the nation’s leading goal-scorer, Ramey Kerns (21 goals).

Prior to ETSU: Spent an extensive amount of time with the Austrian national squad, playing for her country's U17, U19 and A-national teams... scored 13 goals in her international career... began her international career as a member of Austria's U17 team, helping win the first round of UEFA U17 European Championship qualifying by scoring four goals in group play... scored three goals in matches against Hungary and Portugal for the Austrian U19 squad the following year, leading the team through the first round of UEFA European Championship qualifying... was called to join the A-national team later that year, competing against England, Turkey, Slovenia and Nigeria... assisted the U19 team with five goals during the 2011-12 season, helping her squad finish top of their group in UEFA U19 European Championship qualifying... played for SG Bergheim/Hof in Austrian Frauenliga.