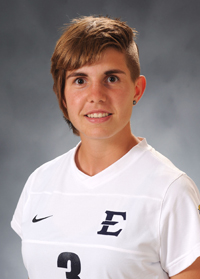 2014: Made her collegiate debut Aug. 22, scoring the game-winning goal in the Bucs' season-opening, 3-2 win versus Radford... Dished out one assist in ETSU's commanding 6-1 win versus South Carolina State... Scored one goal in ETSU's record-breaking, 12-0 victory versus Alabama A&M.

Prior to ETSU: Competed in European Championship qualifying campaigns as a member of Spanish National Team's Under-17 and Under-19 teams... Helped Spain advance to the UEFA Under-19 Championship final in July 2014... Played for the Athletic Club of Bilbao... Helped Bilbao to a Basque Cup title in 2011 and a Segunda División Nacional league championship in 2012... Earned a spot on the Basque National Team in 2012... Named Best Central Defender in 2013 Spanish Soccer Draft.