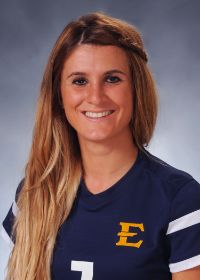 Prior to ETSU: Member of Italy's Under-17 and Under-19 National teams