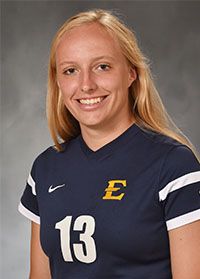 Prior to ETSU: Played for FC Zurich in Switzerland since 2003 ... in 2013, helped team reach the Quarterfinals of the UEFA Champions league tournament ... represented the U19 Women's National Team in elite qualifying round of the 2013 UEFA U19 Women's European Championships ... while on U19 nationa squad she scored two goals in 12 games