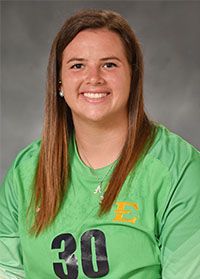 2013: Yancey received her first start on Sept. 6, 2013, recording four saves in ETSU's 2-0 win over Winthrop. She recorded three shutouts in five starts for the Bucs, posting a goals against average of 0.89 and a save percentage of .860.

Prior to ETSU: Yancey played for the Panathinaikos Soccer School in Memphis, Tenn., in addition to playing for Bolton High School.