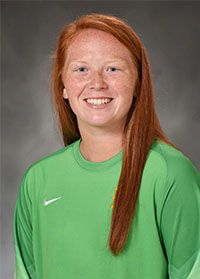 Prior to ETSU: Played at North Oconee High School ... at the club level played for CESA Carolina Elite Soccer Academy ECNL U18 team ... was co-captain during senior year at North Oconee HS ... had a goals against average of 0.50 along with posting 10 shutouts as a senior ... in 2015 propelled her team to qualify for the Class 8AAAA state playoffs, posting an overall record of 12-3 ... garnered First Team Region 8-AAAA honors ... as a freshman broke the school record for fewest goals allowed in a season with 16