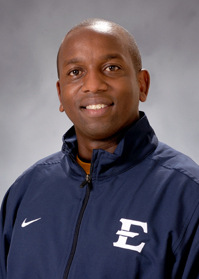 Joel Wanyoike joined the ETSU coaching staff in 2014 after serving as an assistant coach at Milligan from 2010-13. While at Milligan, Wanyoike also served as the team's goalkeeper coach. Wanyoike holds an NSCAA National Diploma.

During the 2014 season, Wanyoike was apart of a Buccaneer squad that won 15 games, the most in program history. Wanyoike assisted ETSU to their third postseason birth in four years.

While at Milligan, Wanyoike helped lead the Buffaloes to an AAC Championship in 2011 and runner-up finish in 2010. Wanyoike also served as an assistant coach for the Milligan men's soccer team in 2009, helping guide the Buffs to an AAC championship title.

A native of Nairobi, Kenya, Wanyoike graduated from Milligan in 2006 with a degree in computer information systems.

Wanyoike enjoyed a successful playing career at Milligan, helping lead the Buffs to an AAC title, Region XII Championship, and National Sweet 16 appearance in 2006. As a freshman in 2003, Wanyoike recorded the most shutouts as a freshman starting goalkeeper in program history, earning a spot on the AAC All-Conference Third Team.