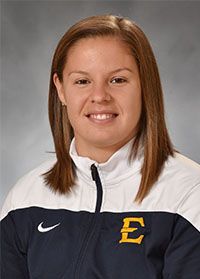 Amanda Malkiewicz joined the ETSU coaching staff in the Summer of 2016 after serving as the head coach at Concord University in Athens, West Virginia from 2014-15.

In two season as head coach of the Mountain Lions she produced three All-MEC players along with a two-time All-Region honoree. During the 2015 season, she implemented an excellent defensive philosophy that held opponents to one goal or less in 11 games including holding nationally-ranked West Virginia Wesleyan scoreless.

Before becoming head coach at Concord, she served as an assitant from 2012-13. Malkiewicz was an integral part of the 2012 team that compiled an overall record of 16-16-4 while earning a spot in the West Virginia Intercollegiate Athletic Conference Tournament Semifinals.

Prior to coaching the Forked River, New Jersey native played at East Carolina University from 2008-11, appearing in 80 games and totaling 69 career points off of 25 goals and 19 assists. As a forward, Malkiewicz was a three-time All-Conference USA member and ranked second in career assists, third in goals and fourth in points at ECU.

She holds a United States Soccer Federation (USSF) "B" License and has served as the associate coach in training (ACT) for the United State Region I Olympic Development Program since July 2013.