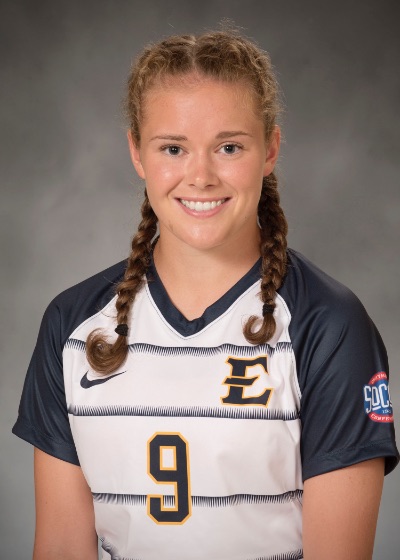 Fall 2021: Named to SoCon Honor Roll ... Red-shirted the season due to injury.

2020-21: Made four starts and five appearances before suffering a season-ending injury…registered 10 shots on the year, five on target…played 80 minutes in the 2-1 win against UNCG (3/5/21), registering three shots in the game…matched her effort of three shots in the draw against VMI (3/7/21), playing a season-most 84 minutes…played 51 minutes, took two shots and helped the Bucs to a lead before being subbed off with a lower leg injury against Chattanooga (3/12/21)…named to the SoCon Honor Roll, SoCon All-Academic Team and was awarded the Commissioner’s Medal.

2019: Appeared in 19 contests and made 14 starts…led the team in scoring with six goals and 13 points…opened her account in a 5-2 win at Delaware State (Sept. 8)…scored in three consecutive games, starting with the first of two goals against Hampton (Sept. 18) while recording a season-high six shots on goal…followed that up with a 30 yard strike past Western Carolina (Sept. 27)…finished the streak with a first half hat trick and an assist against South Carolina State (Sept. 30) in a 5-0 rout…entered the top 10 in Buccaneer history in goals scored with 16 career strikes…finished the season with a nod to the 2019 Fall Academic All-Conference team…earned a spot on the 2019 Academic All-District Team for her work on the field and in the classroom...appeared on the SoCon Honor Roll...recipient of the Southern Conference Commissioner's Medal.

2018: One of three players to appear in all 20 games for the Bucs, starting 19 of those ... Earned second team all-conference honors ...  Scored eight goals on the season to tie Eleonora Goldoni for a team-best ... Led the team with three game winners ... Added two assists for 18 points — setting career highs for points, goals, assists, game winning goals, shots and shots on goal ... Had four goals against Wofford on Sept. 23, recording ETSU's first haul since 2014 ... Earned SoCon Player of the Week and Student Athlete of the Week for Sept. 19-25 following her performance vs. the Terriers ... Also scored the game winning goal in the SoCon quarterfinals vs. Mercer during the 80th minute, sending ETSU to the semifinals ... Also scored the game winner at Western Carolina for a 1-0 win ... Fall 2018 Southern Conference all-academic selection ... SoCon honor roll for 2018-19.

Prior to ETSU: Played as a forward in the Women's Premiership of Northern Ireland, the top level of women's football in the region ... Scored three goals in five appearances for Glentoran Womens FC, ranking second on the team in goals ... Has scored 23 international goals across all levels of national competition ... Made her senior level debut at the age of 15 in 2014 ... Appeared on the U15, U17 and U19 Northern Ireland national teams from the span of 2012-2017 ... Played for a number of well-known coaches such as Gail Macklin of Glentoran Belfast United FC, Alfie Wylie of the Northern Ireland senior national team and Noel Mitchell at the Northern Ireland youth level.

Personal: Born October 5, 1998 ... From Ballygowan, County Down, Northern Ireland ... Daughter of Samuel and Rosemary Connolly ... Majoring in journalism at ETSU ... Also possesses musical talents as a member of the Ravara Pipe Band back home in Northern Ireland alongside her father, uncle and brother.