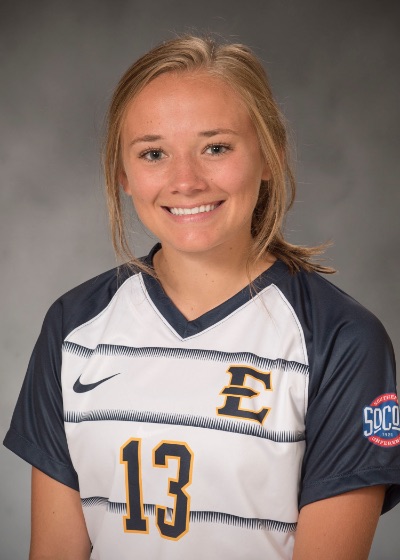 Fall 2021: Named to SoCon Honor Roll … Started first four matches before suffering season-ending injury … Assisted on the game-winning goal vs. Presbyterian on Aug. 26 … Took three shots in the 1-0 win at UNC Asheville on Aug. 29 … Logged 275 minutes on the pitch in the four matches, including a season-high 74 at Radford on Sept. 2.

2020-21: Made six starts and all eight appearances on the season…led the team in shots with 16…put five shots on target…scored her only goal of the season against UNCG (3/5/21), proving to be the game winner with a top corner finish…played a season-high 87 minutes in the draw against VMI (3/7/21), setting a career-high in shots with six…played 79 minutes and registered three shots in the overtime loss to Chattanooga (3/12/21)…named to the SoCon Honor Roll and the SoCon All-Academic Team.

2019: Made 17 starts in her 18 appearances before suffering a lower leg injury to put her out the final two games of the year…scored three goals and an assist on the year for seven points on the wing…opened the season with a goal from distance against King (Aug. 22)…recorded an assist in 5-0 win against South Carolina State (Sept. 30)…scored her second goal of the season against Samford (Oct. 4) on a season-high three shots…scored the third goal in a 3-1 win over The Citadel (Oct. 20) with a volley…played a season-high 99 minutes in the double-overtime contest with Mercer (Oct. 18)...appeared on the SoCon Honor Roll.

Prior to ETSU: Graduated from Monarch High School in Louisville, Colorado, about 20 minutes away from her hometown of Erie ... Led the Coyotes in goals with eight her senior season while leading the team to a 33-16-1 record and back-to-back-to-back 5A playoff appearances over the span of three years ... Was a 2017 first team all-conference selection by the CHSSA and made the ODP Region IV Colorado team in 2015 and 2016 ... Academic all-state selection from 2015-17.

Personal: Born March 1, 1999 ... From Erie, Colorado ... Daughter of Sam and Darlene Sours ... Majoring in Biology / Pre-Vet ... Cites a deciding factor in coming to ETSU was her coach back in Colorado, former ETSU player Lena Summers, who was instrumental in building the ETSU program in its early stages from 1998-2002.