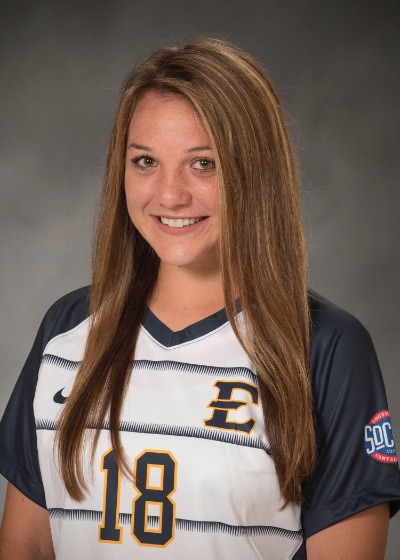 2020-21: A starter for the Bucs in all eight matches, only missed 13 minutes of the entire season…was given captain duties in Jay Yelton’s first season at the helm of the Buccaneer program…played the most minutes (748) of any outfield player…scored the game-tying goal in the eventual win over UNCG (3/5/21), hitting a 35 yard screamer of a free kick for her first collegiate goal…registered a shot in three straight games from her center back position…took the corner kick that fell to the eventual equalizer in the draw against VMI (3/7/21)…registered her first assist of the season off a free kick against Chattanooga (3/12/21)…named to the SoCon Honor Roll, SoCon All-Academic Team and was awarded the Commissioner’s Medal.

2019: Played in 19 contests on the year, starting 12 of them from the midfield…a set-piece specialist, King registered three assists from free kicks and corner kicks…grabbed her first assist in the season-opener against King (Aug. 22)…collected an assist of a corner to equalize against Gardner-Webb (Sept. 1), playing a season-high 93 minutes of action…registered her final assist off a free kick in the 3-1 win against The Citadel (Oct. 20)...appeared on the SoCon Honor Roll...recipient of the Southern Conference Commissioner's Medal.

Prior to ETSU: Lettered four seasons at Providence High School in Charlotte, N.C. for head coach Nathan Williams, primariliy starting at center midfielder ... Started 84 of her 96 career games in high school, winning the MVP award her senior year in 2017 ... Named to the All-Conference first team in 2015, 2016 and 2017 while making the All-Region team in 2016 and 2017 ... Helped the Panthers win the 2016 state championship and achieve a state championship runner-up finish in 2015 ... Was an elite club national finalist in 2016.