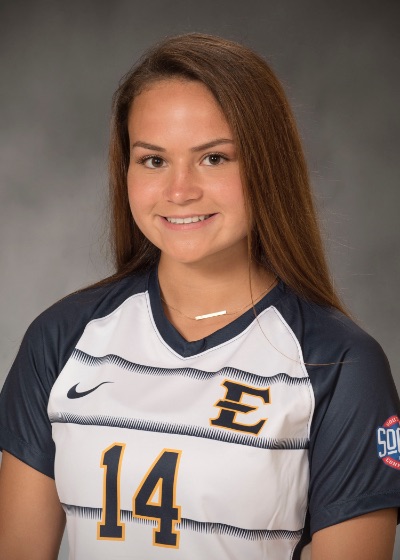 2019: Appeared in 19 games for ETSU, making nine starts…opened her collegiate scoring career against South Carolina State (Sept. 30), scoring a goal while providing two assists…played 80 minutes in a double-overtime loss to Mercer (Oct. 18), a career-high…scored her second goal of the season in a 3-1 win over The Citadel (Oct. 20)...appeared on the SoCon Honor Roll.

2018: Appeared in five games during her freshman campaign, including appearances off the bench in ETSU's first three games of the season and later at Charlotte and vs. No. 9 Tennessee ... Took two shots ... 2018-19 Southern Conference honor roll.

Prior to ETSU: Lettered four years in soccer, basketball and track at Winfield High School in Winfield, West Virginia … Totaled 108 career goals and 39 assists as a forward for the Generals, helping Winfield win three-consecutive state championships in 2014, 2015 and 2016 … First-team All-State selection in 2016 and 2017 while garnering a second team selection in 2015 … Was named Rookie of the Year, All-Conference and an All-State honorable mention in 2014 … Also had success on the track and field surfaces and on the hardwood, helping the Generals to back-to-back-to-back track and field state championships from 2015-17 while earning a trip to the 2017 basketball state Final Four … All-State honorable mention and All-Defense selection in basketball in 2017.