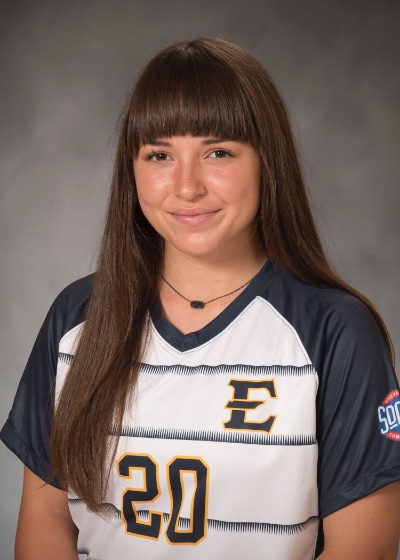 2019: Made two appearances on the season…opened her season with a cameo in the game against Hampton (Sept. 18)…had a season-high 25 minutes against South Carolina State (Sept. 30)...appeared on the SoCon Honor Roll.

2018: Appeared in six games as a true freshman ... Took one shot on the season ... Recorded an assist in her unofficial college debut in an exhibition game against Appalachian State just minutes into her debut, setting up Eleonora Goldoni for a goal in a 4-1 preseason win ... 2018-19 Southern Conference honor roll.

Prior to ETSU: Played attacking midfielder her freshman and sophomore years and centerback her final two seasons at Siegel High School for head coach Michael McGoffin ... Helped her team to the state quarterfinals her freshman and senior seasons, two district championships in 2016 and 2017, a regional and sectional championship in 2014 and another sectional championship in 2017 ... Had a breakout senior season where she was named to All-State, All-Mid State First Team, All-Area and All-County, as well as her team's varsity captain and varsity defensive MVP ... Scored 28 goals and 57 assists throughout her high school career, including six as a centerback her senior year.