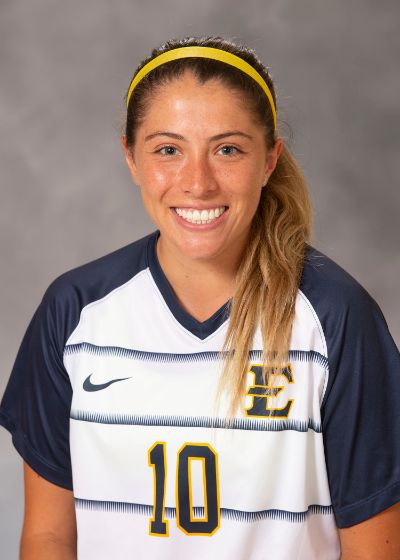 2019: Played in 19 contests, starting in every match she played in for the Bucs in her only year as a grad transfer…scored a debut goal as a Buccaneer in the contest with King (Aug. 22)…played a season-high 107 minutes in a 0-0 draw with USC Upstate…scored one of five goals in the win at Delaware State (Sept. 8)…recorded her only assist in the 2-1 loss to Mercer (Oct. 18), playing the whole 103 minutes…played the whole 90 minutes on two separate occasions…collected 16 shots on the year.

Prior to ETSU: Graduate of Austin Peay before attending grad school at ETSU...appeared in only two matches before suffering a season-ending injury...started in 16 of her 18 appearances as a redshirt sophomorefor the Govs, recording three assists in 1444 minutes of action...provided the game-winning assist that secured Austin Peay a place in the OVC Tournament...named to the ALL-OVC newcomer team as a redshirt freshman, scoring two goals and grabbing two assists in 20 starts in the midfield...scored a game-winning goal against Eastern Kentucky after collecting an assist on her first two matches of her collegiate career.

Personal: Born on December 5...daughter of Enrique Penaloza and Liliana Pardo...obtaining her master's degree in master brand and media strategy.