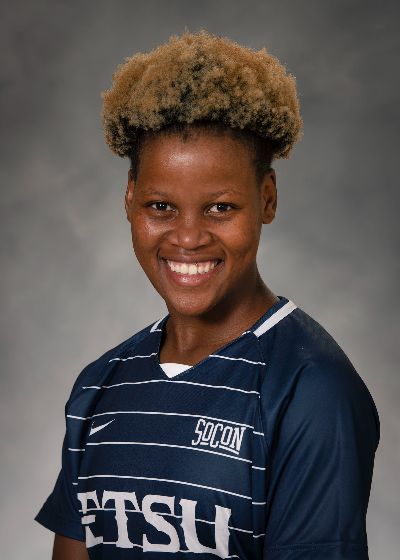 Fall 2021: Started in all 16 matches, logging 1,246 minutes on the pitch … Registered one goal, one assist, three points and 12 shots (seven on goal) … Recorded a goal in the 2-1 road win at UNCG on Oct. 22 … Assisted on the game-winning goal against Western Carolina on Oct. 8 … Took at least one shot in seven of the 12 matches, including two shots at UNCG.

2020-21: Earned a SoCon All-Freshman Team selection…played in all eight of the shortened season, starting in seven of the contests from the midfield…played in 707 of the 761 minutes, the most of any freshman by nearly 350 minutes and the fourth most of all outfield players…averaged 88 minutes per contest in her rookie season…registered two shots from her spot in the defensive midfield...named to the SoCon Honor Roll.

Prior to ETSU: Played for Cape Town Roses in the Western Cape Sasol League...Sinoxolo has represented her national team on a variety of levels, including her introduction to the U17 team at just 15 years old...she was also the youngest on the U20 team when she joined at just 16 years old...helped her side win the Western Cape Sasol League in 2013...Cesane did a treble by wining the Sasol Women’s League, the Coke Cup and the National League Play-offs in 2014...Cesane was also part of a South African U-20 team that was the African Union Sport Council Region 5 Championship.