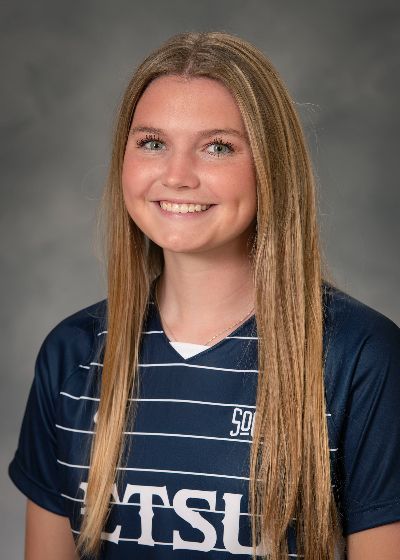 Fall 2021: Named to SoCon Honor Roll … Played in all 16 matches, making 13 starts … Logged 1,249 minutes on the pitch … Tallied one goal, three assists, five points and 11 shots (six on goal) … Scored first collegiate goal in the 1-0 win at Wofford on Oct. 1 … Had her first collegiate assist in the 2-1 road win at MTSU on Sept. 10 … Assisted on both goals in the 2-1 victory at UNCG on Oct. 22 … Made collegiate debut in season-opening win over Presbyterian on Aug. 26 … Made first collegiate start on at UNC Asheville on Aug. 29 … Played all 110 minutes in scoreless draw vs. Mercer on Sept. 26 … Played all 90 minutes against The Citadel, Furman, Western Carolina, Samford, UNCG and VMI.

Prior to ETSU: Region 1-AA Player of the Year and State Champion her senior year at Greenville HS...finished her senior season with 28 goals and 11 assists on her way to becoming a district, region and state champion...capped off back-to-back seasons that Greenville swept districts, regionals and state after a 2019 season where Cook won TSSAA D1-AA All-District and All-State honors after scoring 12 goals and seven assists...a state semifinalist her sophomore year and a state runner-up in her rookie campaign, never finishing a season with fewer than 11 goals...earned her first D1-AA District 1 Offensive Player of the year as a sophomore as well as a TSSAA Class AA All-State Selection...earned TSSAA D1-AA All-District First Team honors and a THSSCA D1-AA All-State Team Selection as a junior...finished with 64 goals and 31 assists notched under her belt.

Personal: Born January 13, 2003...daughter of Brian and Lana Cook...majoring in biology at ETSU.