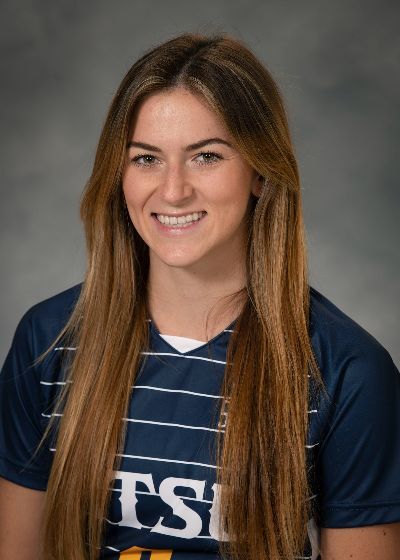 Fall 2021: Earned SoCon All-Academic Team honors … Placed on SoCon Honor Roll … Played in all 16 matches, making four starts … Logged 733 minutes on the pitch … Assisted on the game-winning goal at VMI on Oct. 24 … Played all 90 minutes in the win over the Keydets … Took two shots on the season, including one on target – also in the game against VMI … Made first start of the year versus Samford on Oct. 17.

2020-21: In her freshman season, made eight appearances while earning three starts…played a versatile role, sharing time in the defense and the attack for the Bucs…after playing 77 minutes through the first three games, played an average of 76.4 minutes per game in the final five matches…played all 90 minutes in the season finale against Wofford (3/26/21), registering her lone shot of the season.

Prior to ETSU: A graduate of Science Hill HS, Carlsen proved a goalscoring threat for the Lady Toppers. Paige scored a goal in the TSSAA Class AAA State Quarterfinals in a marginal 3-2 loss to Maryville. Her goal in regionals helped Science Hill cruise to a place in the sectional final, knocking off Powell 2-1…Carlsen and co. bowed out of the state tournament, but not before accumulating a 13 game win streak over the course of the season.