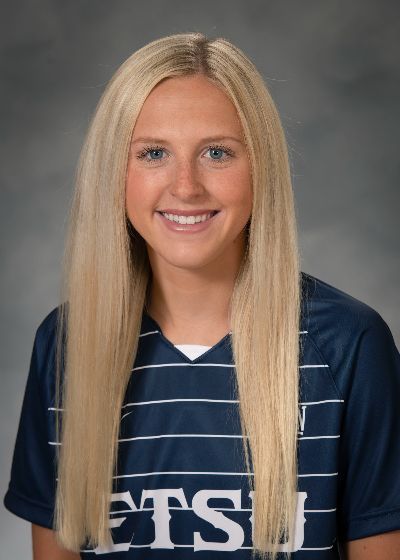 Fall 2021: Earned SoCon All-Academic Team and SoCon Commissioner’s Medal … Named to SoCon Honor Roll … Played in all 16 matches, making 13 starts … Logged 881 minutes on the pitch … Totaled one goal, 24 shots (17 on goal) … Scored the lone goal in the 1-0 win against Presbyterian in the season opener … Took a season-high five shots against the Blue Hose … Tallied at least one shot in 11 of the 16 matches … Played a season-high 79 minutes against Tennessee Tech.

2020-21: Featured in all eight games of the season, starting in six…averaged 74 minutes per game…her versatile game allowed her to play in both the attacking and defensive half of the field…played all 90 minutes of the game against Lipscomb (2/21/21)…played a season-high 97 minutes in the double-overtime loss to Chattanooga (3/12/21)…grabbed her only shot and shot on target in the narrow defeat to Wofford (3/26/21) on the final game of the season…named to the SoCon Honor Roll, SoCon All-Academic Team and was awarded the Commissioner’s Medal.

2019: Made 11 appearances on the season, starting her first game against UNCG (Oct. 27)…recorded two shots from the defensive midfield role, playing in a season-high 60 minutes in the final game of the season against The Citadel (Oct. 30)...appeared on the SoCon Honor Roll...recipient of the Southern Conference Commissioner's Medal.

Prior to ETSU: Graduate of Fort Mill High School...four-year letterwinner in soccer...two-time state champion for club soccer, winning in 2016 and 2017 for the Carolina Rapids ECNL...scored the winning goal in overtime for the NC State Championship in 2017...All-Region offensive player for Fort Mill high School in 2018-19 season, leading the team in goals.

Personal: Born July 10, 2001...daughter of Brian and Nancy Philips...currently undecided on a major.