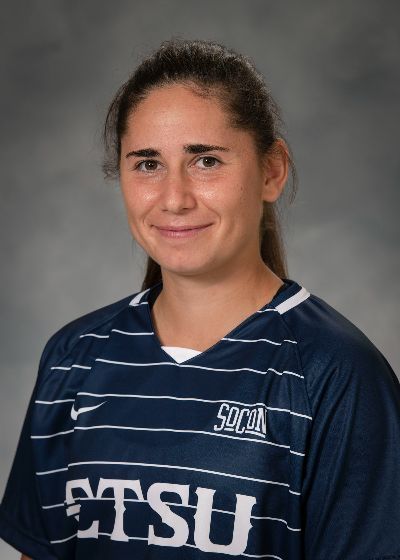 Fall 2021: Played in all 16 matches, making 15 starts … Logged 1,143 minutes on the pitch … Tallied 12 shots (five coming on goal) … Took a season-high three shots at Radford on Sept. 2 … Tied a season high in minutes played (94) against Tennessee Tech and Mercer … Played all 90 minutes against Chattanooga.

2020-21: Made five starts and seven appearances in her sophomore season…recorded her lone goal in the season opener, equalizing in the second half against Marshall (2/13/21)…played a season-high 94 minutes against The Herd, recording two shots…played all 90 minutes in the 2-1 win over UNCG (3/5/21), taking a season-high three shots…played all 90 minutes in her final game of the year at Western Carolina (3/19/21)…averaged 81 minutes per game for the Bucs…named to the SoCon Honor Roll and the SoCon All-Academic Team.

2019: A late entry to the class, was able to play in the final 17 games, making 16 starts…led the team in assists with six while scoring twice, contributing 10 points on the season…had a season-best game against Delaware State (Sept. 8), scoring twice and providing an assist in the 5-2 win…recorded an assist in four-straight games, covering from Hampton (Sept. 18) to Samford (Oct. 4)…registered her sixth assist of the game in the match against Mercer (Oct. 18)…played in 1,362 minutes over the course of the season in her freshman campaign...appeared on the SoCon Honor Roll.