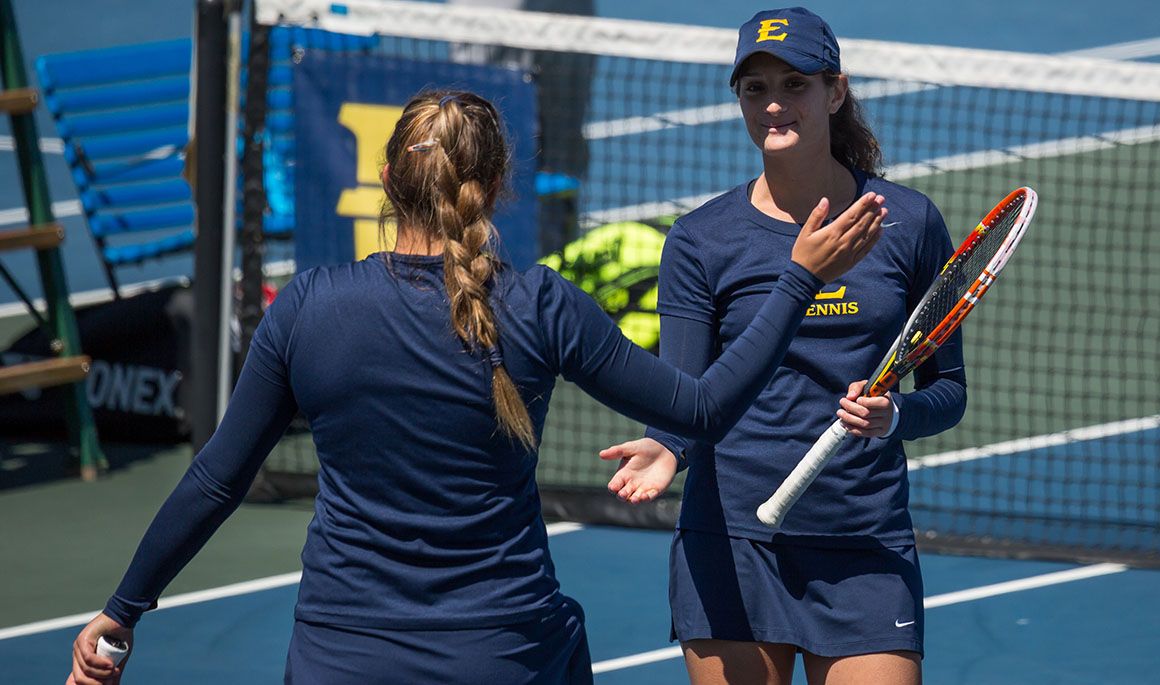 ETSU begins season with round robin tournament in Blacksburg

JOHNSON CITY, Tenn. (Jan. 20, 2017) – The ETSU women’s tennis team will open its 2017 schedule with a trip to Blacksburg, Va. where the Bucs will compete in a two-day round robin tournament with Virginia Tech and Troy on January 21-22.

Following a successful 2015-16 season, the Bucs look to continue their momentum with a pair matches this weekend. Last year, ETSU finished the season 20-3 with its only losses coming from Furman, No. 66 Winthrop and No. 3 North Carolina. The Blue and Gold cruised through the SoCon Tournament as the team swept Mercer, Chattanooga and Samford 4-0 to claim its first crown since 2014. The Bucs traveled to Chapel Hill, N.C. where they were matched with No. 3 North Carolina in the NCAA Tournament. However, ETSU dropped the contest 4-0 for only its third loss of the season.

The Bucs return several key players this season including: Ioanna Markesini (Athens, Greece), Marina Espana (Castellar Del Valles, Spain) and Melissa Esguerra (Derrimutt, Australia). Announced a week ago, Markesini was ranked No. 95 by the ITA (Intercollegiate Tennis Association) in singles tennis. The Greece native went 16-3 in singles last year, which was tied for the second-most wins on the team. Markesini and Espana were the team’s winningest doubles tandem last year where they went 17-3 to lead the Blue and Gold. Espana went a perfect 19-0 last year while mainly playing as the No. 4 in singles. Esguerra nearly went perfect as she finished the season 16-1 including going 7-0 in the Southern Conference.

At the conclusion of the 2016 season, the Hokies were ranked 38th in the final ITA ranking. Virginia Tech completed the season 14-11 and 7-7 in ACC play. The Hokies opened their schedule last year 2-0 after defeating Radford 7-0 and SoCon foe Western Carolina 6-1.

The Hokies made it to the NCAA Tournament last year but were upended early by Mississippi State, 4-0.

The Trojans, who went 12-9 last year, made a run in the Sun Belt Conference Tournament after defeating Georgia Southern in the opening round 4-1, but they fell in the semifinals to ranked Georgia State, 4-0. Troy opened its 2015-16 season going 5-2, but it finished the season with a 1-4 record.

Troy has a very experienced lineup with five of the seven players being juniors or seniors. To lead the Trojans is the Lebanon native, Nancy Karaky. She went 20-9 in singles play while going 19-11 in doubles matches last year. Teammate and fellow junior, Sanae Ohta, had a strong season last year as she went 19-10 in singles and doubles play.