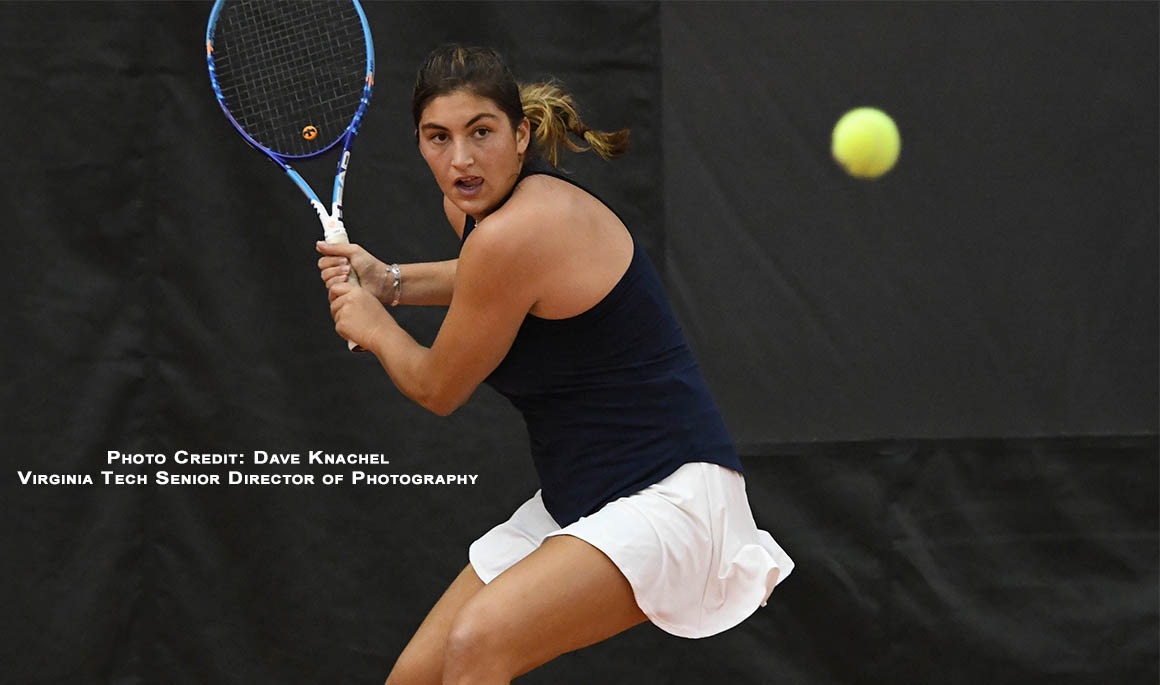 Marina Guinart Espana is now 2-0 in singles play after sweeping both singles matches this weekend.
Bucs sneak out 4-3 win over Troy in Blacksburg
Related Links

BLACKSBURG, Va. (Jan. 22, 2017) – After falling to Virginia Tech to open the season, the ETSU women’s tennis team rebounded and snuck out a 4-3 win over Troy in a neutral site dual match in Blacksburg, Va. on Saturday morning.

To open the match, ETSU took two out of three doubles matches. Alory Pereira (Sao Paulo, Brazil) and Yi Chi Ma (Kaohsiung, Taiwan) stayed hot as they defeated Nancy Karaky and Alicia Rodriguez 6-4. The ETSU duo is now 2-0 in doubles play, which is the only perfect tandem for the Bucs. Marina Guinart Espana (Castellar Del Valles, Spain) and Ioanna Markesini (Athens, Greece) rebounded in doubles play as they defeated their challengers 6-3.

In singles play, Guinart Espana stayed hot as she swept Hannah Seizer in two sets, 6-1, 6-2. She is now a perfect 2-0 in singles matches after defeating Elena Cerezo-Codina in three sets on Friday. With Guinart Espana’s win, ETSU went up 2-0 early in the match. However, Troy put pressure on the Blue and Gold as it knotted the match at 2-2 as Rodriguez and Efriliya Herlina won their singles matches.

ETSU quickly rebounded and took the 3-2 advantage as No. 95 Markesini defeated Sanae Ohta in straight sets, but the Trojans knotted it back up again with a Luisa Ferrauti win in three sets.

All tied at 3-3, ETSU newcomer Pereira had the pressure on her to give the Bucs the victory. She lost the first set 7-6 but knocked out Karaky 6-4, 6-4 in the second and third sets to give ETSU the 4-3 win.

After splitting in Blacksburg this weekend, ETSU (1-1) will take two weeks off before it hits the court again. The Bucs will travel to Lynchburg, Va. where they will take on Liberty on February 4 at 10 a.m.