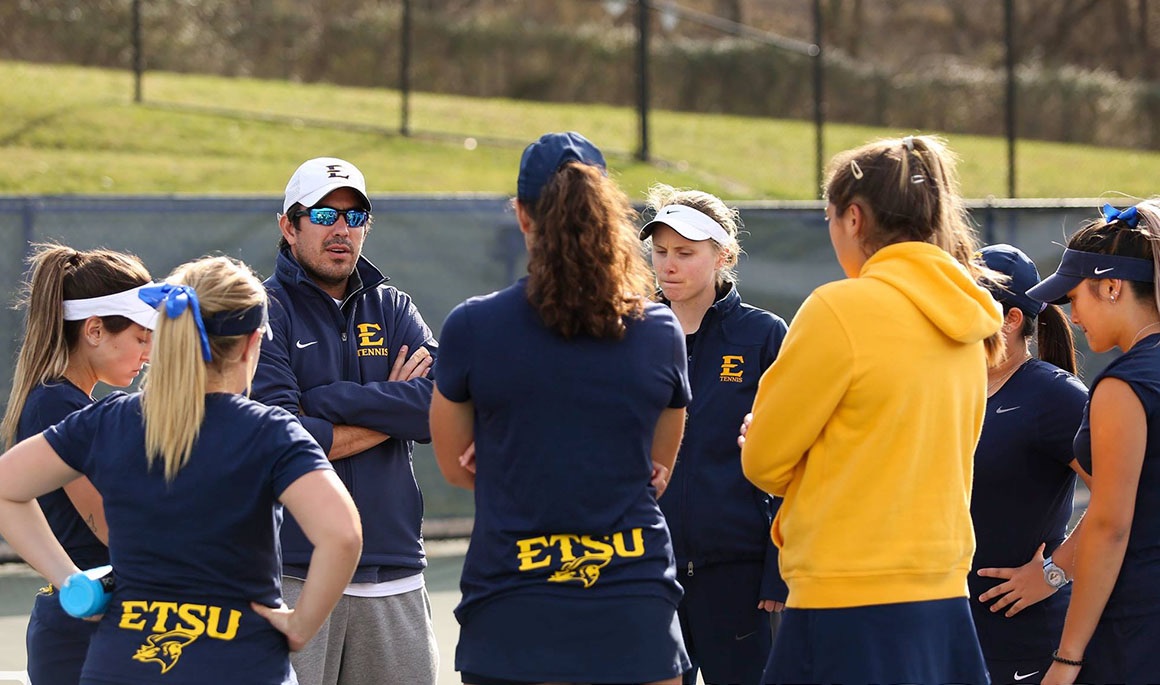 JOHNSON CITY, Tenn. (Feb. 11, 2017) – After taking eight days from the court, the ETSU women’s tennis team will travel to Raleigh, N.C. to square off against Atlantic Coast Conference member North Carolina State on Feb. 12 at 6 p.m.

ETSU is coming off a heartbreaking loss as the Bucs went up 3-0 at Liberty, but the Flames came back to win 4-3 by taking the next four singles matches.

The Intercollegiate Tennis Association (ITA) has ranked Ioanna Markesini (Athens, Greece) nationally in back-to-back polls. In the most recent poll, the junior came in at No. 105. Markesini has played solely out of the No. 1 slot for the Blue and Gold and sports a 3-1 record in both singles and doubles play.

Marina Guinart (Castellar Del Valles, Spain) is the lone Buccaneer who is still undefeated in the first four matches for women’s tennis. Since arriving at ETSU, the sophomore has won 23 straight singles matches.

In doubles play, Yi Chi Ma (Kaohsiung, Taiwan) and Alory Pereira (Sao Paulo, Brazil) is the lone tandem that is undefeated. The duo is 4-0 while playing solely out of the No. 2 slot for the Bucs.

ETSU is currently 2-2 on the year including going 2-1 in the last three matches. In that span the Bucs are 14-7 in those head-to-head dual matches.

North Carolina State has started its season red hot as it is 6-2 on the year including going 5-1 at home. The Wolfpack opened their season with a three-game win streak as they swept Appalachian State and Campbell 7-0 at the J.W. Isenhour Tennis Center. Following that streak, they went to Malibu, Calif. for the ITA Kick-Off Weekend where NC State went 1-1 with the loss coming against No. 3 Pepperdine (4-0). After suffering their first loss, the Pack hosted Kansas where they were upset by the Jayhawks 4-3, but NC State recovered as it won the next three matches 6-1 including SoCon foe Furman.

The Wolfpack have two singles players ranked in the most recent ITA rankings as Martina Frantova ranks the highest at No. 31. The senior from Slovakia is 3-1 in dual matches this year, and in overall matches this year, she is 4-4 against nationally ranked opponents. Teammate Amanda Rebol comes in ranked one spot behind ETSU’s Markesini at No. 106 after not being ranked prior to the season. The sophomore from Georgia is 13-1 overall between the fall and spring seasons including 5-0 in dual matches this season. She has played out of the No. 5 and 6 slots for her team.

The dual match is scheduled for a 6 p.m. start at the J.W. Isenhour Tennis Center in Raleigh, N.C.