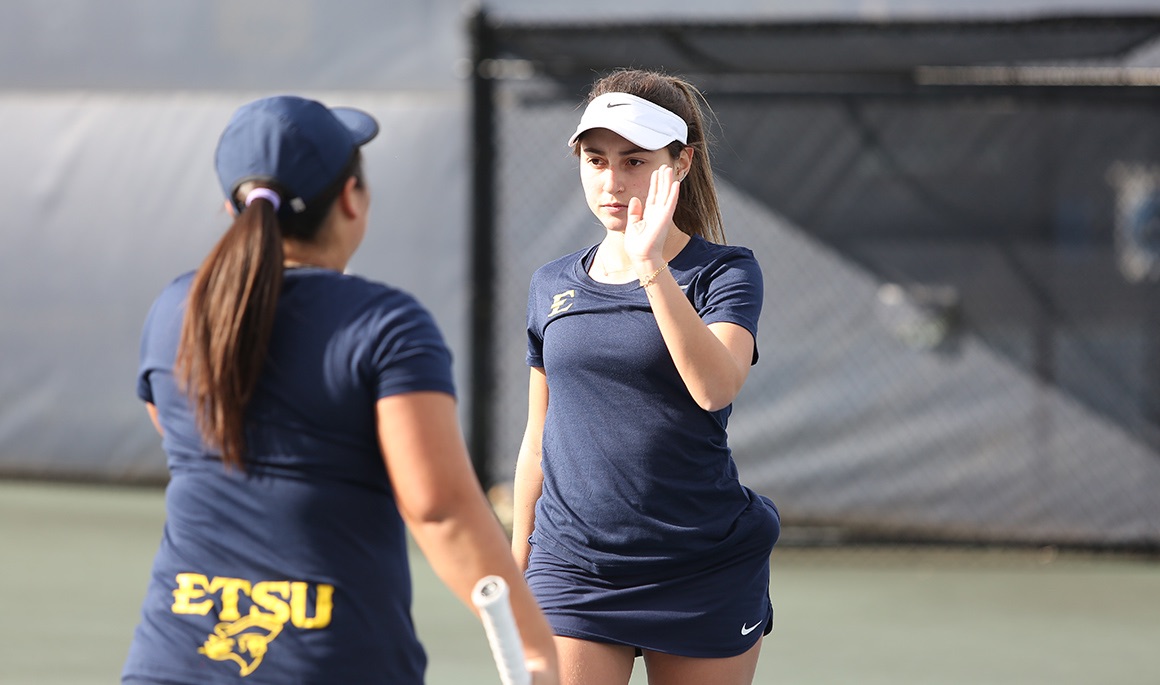 JOHNSON CITY, Tenn. (March 16, 2017) – The ETSU women’s tennis team begins its Southern Conference play as the Bucs will host Tennessee-Chattanooga on Friday at 1 p.m. and then travel to Cullowhee, N.C. to face Western Carolina on Sunday at 1 p.m.

The Bucs enter SoCon play with a 5-4 overall record including winning two straight matches against Georgia State and Savannah State on the road.

Last week, Marina Guinart (Castellar del Valles, Spain) was named the conference player of the month as she went 9-1 in February between doubles and singles play. She was a perfect 5-0 in solo matches as the sophomore is 8-0 to start the 2017 season including a perfect 27-0 since she stepped on campus last year. The Spain native and her doubles teammate, Ioanna Markesini (Athens, Greece), was 4-1 last month as the duo lost just one match out of the No. 1 slot for the Bucs.

MTSU transfer Alory Pereira (Sao Paulo, Brazil) was dominant two weeks ago as she was named the SoCon women’s tennis player of the week for her performances against Georgia State and Savannah State. She posted a 4-0 record where she led the Bucs to an undefeated road trip. Her and her doubles teammates Yi Chi Ma (Kaohsiung, Taiwan) have been one of the best tandems this year as they have the best winning percentage in doubles play for ETSU at .778 (7-2). The duo is winners of the last two matches where they upended Kristin Rehse and Damira Mumunovic of Georgia State and Jennyfer Vivas and Rachida el Kateb.

The Mocs enter the dual match with an 11-3 overall record including five straight wins. They have already played one conference match this year where they hosted UNCG and narrowly defeated the Spartans 4-3. In its five-game win streak, UTC defeated Alabama State, UNCG, MTSU, Jacksonville State and Murray State.

UTC has a pair of players that have suffered two losses this year in Caroline Hall and Sydney Patton. Hall is 11-2 this year playing mainly out of the No. 3 slot. She sports an 8-1 record out of that position and has won five straight matches. Patton is 10-2 on the year as she is a perfect 9-0 in the No. 4 slot for the Mocs.

In doubles play, Samantha Caswell and Rachele Gazzola have been the biggest threat for the Mocs as they are 8-3 this year. They have won four consecutive doubles matches and are 1-0 in the SoCon this year.

The Catamounts are currently 10-4 on the year including a perfect 4-0 record on their home court. In their last five matches, WCU has won four matches with all four wins coming at a neutral site. The team has also opened its SoCon play already with a 6-1 road loss to Mercer over 10 days ago.

Western Carolina has several players on the team that have suffered four or fewer losses this year. Headlining the four players is Madison Riley who is 12-2 on the year with a 10-2 record in the No. 5 slot. Also playing well in singles competition this year is Jordan Strickland and Alexa Webb who are 10-4 and 11-3 on the year, respectively.

The No. 3 doubles slot for the Catamounts has been one of the strongest positions this year as the team is 11-2. Three different pairs have played in that position with Elizabeth Ansari and Madison Riley being the only undefeated tandem in the slot at 4-0. In the No. 1 position, Strickland and Savannah Taranto are 6-0 on the year. However in SoCon play, the Catamounts have dropped all three doubles matches this year to Mercer.