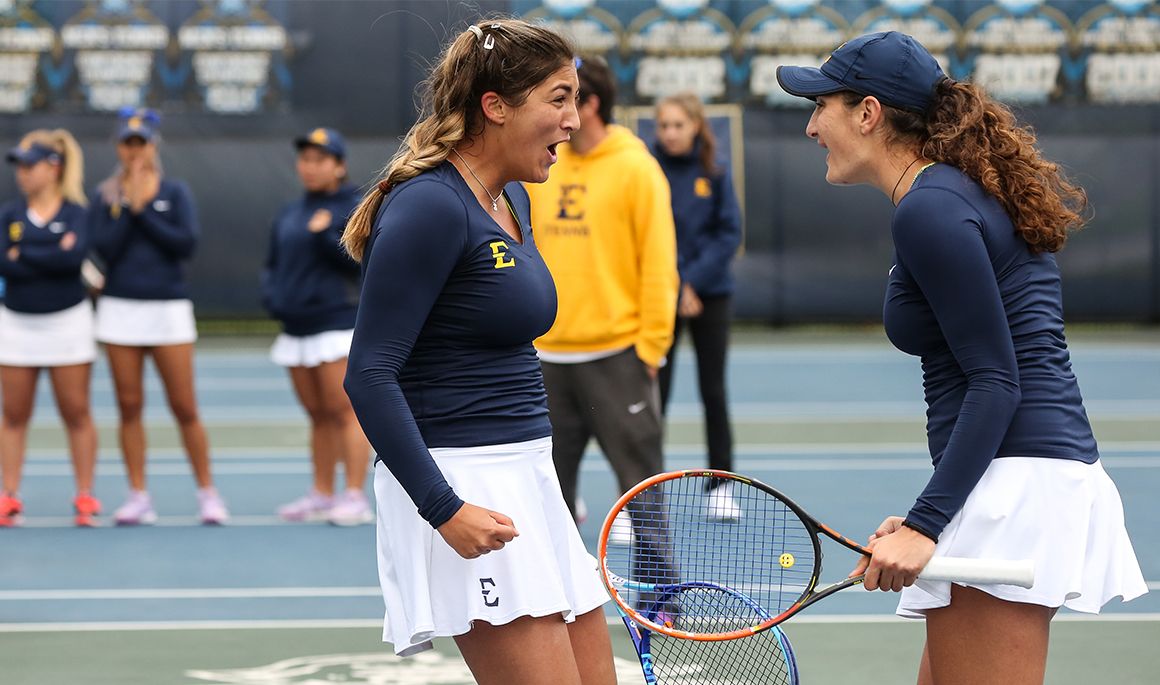 ETSU travels to Wofford and Furman for crucial SoCon matches

JOHNSON CITY, Tenn. (April 5, 2017) – Sporting a six-game winning streak, the ETSU women’s tennis team will put its success on the line as the Bucs travel to Wofford and Furman for a pair of important Southern Conference road matches. ETSU will play Wofford on Thursday, April 6 at 1 p.m. followed by Furman on Saturday, April 8 at 1 p.m.

In their six-game winning streak, the Bucs have claimed four straight conference games where they won two at home and two on the road. Overall this season, ETSU is 9-4 and a perfect 4-0 in the SoCon. In conference road matches this season, ETSU has yet to lose a point as the team is 14-0 in such matches.

In singles play, Marina Guinart (Castellar Del Valles, Spain) and Alory Pereira (Sao Paulo, Brazil) have been dominating this year. Guinart has a win streak of 12 straight while Pereira has a stretch of seven consecutive wins. Guinart is 31-0 in singles play in her career at ETSU, and Pereira is 9-3 since transferring from Middle Tennessee State University this year. Yi Chi Ma (Kaohsiung, Taiwan), Ioanna Markesini (Athens, Greece) and Jayde Viccars (Glen Waverly, Australia) have performed well in the SoCon this year as the trio each sport a 3-1 record in singles play.

Guinart and Markesini have been the backbone for the Blue and Gold in doubles play this year as the pair is 9-3 overall this year and 3-0 in conference play. Melissa Esguerra (Derrimutt, Australia) and Viccars have found a groove as the tandem are 2-1 in their last three doubles matches.

Wofford enters the conference mid-week match with a 10-9 overall record and a 0-3 SoCon mark. The Terriers are 7-2 on their home court. However, in the last three home matches, Wofford has gone 1-2 with its lone win coming against UNC Asheville.

The Terriers are 63-48 overall in singles matches this year with four Terriers posting a winning percentage above .500. Curran Carver and Cassidy Hicks each have a .667 winning percentage, which is the best on the team. Hicks, however, has the best singles conference record on the squad at 2-1 this season.

In doubles play, Wofford is 32-22 in all contests including a 3-6 Southern Conference record. Hick and Kalli Karas lead the team as the duo is 12-7 on the season. Catherine Martin and Lauren Reid have an impressive 12-5 overall record, but they are 1-2 in conference matches.

The Paladins currently lead the Southern Conference with an 18-5 overall record and an unblemished 5-0 conference mark as Furman currently holds a one-win advantage on the Bucs.

Furman also has an 11-game winning streak on the line, which dates back to February 25. In conference games this season, Furman has won 32 point and has only dropped three matches.

Ansley Speaks continues to be the leader on the team as she was recently named the Southern Conference women’s tennis Player of the Week. It was her fourth overall and her second consecutive honor this season. The reigning SoCon Player of the Year is 18-3 this season playing solely out of the first flight. She is undefeated in her last ten matches and is also on a 14-match winning streak.

The Paladins have thrived this year as they are 96-31 overall in singles matches and 47-14 in doubles. Three Paladin duos are undefeated this year in SoCon play as they are each 5-0 this year. The same three duos have a combined overall record of 37-4 this year with Aryn Greene and Speaks claiming the four losses this year out of the No. 1 slot.