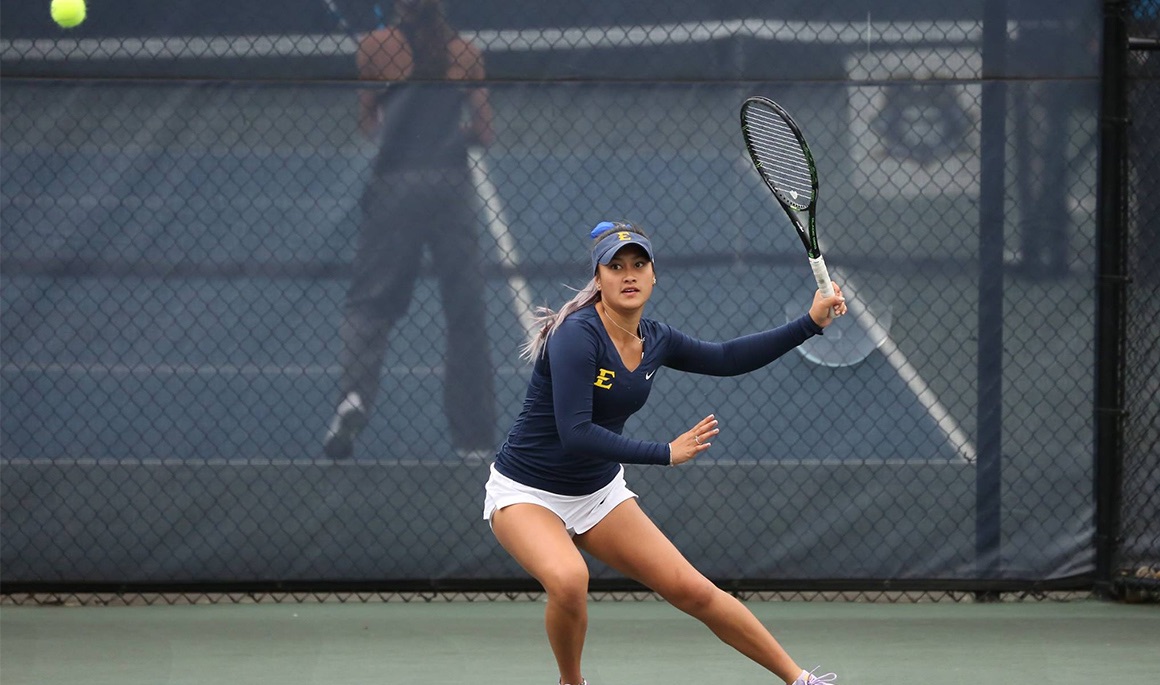 SPARTANBURG, S.C. (April 6, 2017) – The ETSU women’s tennis team defeated Wofford in Spartanburg, S.C. on Thursday, which put the Bucs into a tie for first place in the Southern Conference with Furman prior to the Bucs and Paladins squaring off on Saturday in Greenville, S.C.

Going into the match with a 4-0 Southern Conference record, the Bucs needed to win at Wofford to secure a tie for first place with Furman. The Bucs did just that as they upended the Terrier 6-1 at the Reeves Tennis Center. With the victory, ETSU is now 10-4 overall this season and 5-0 in conference play.

The Bucs cruised through doubles competition as all three pairs won 6-1 or 6-2. Marina Guinart (Castellar Del Valles, Spain) and Ioanna Markesini (Athens, Greece) are now 10-3 on the year. The duo has won five straight matches and is 8-2 in the last ten games. Melissa Esguerra (Derrimutt, Australia) and Jayde Viccars (Glen Waverly, Australia) received their third consecutive win as they upended Taylor Carlson and Emily Erickson 6-2.

Guinart continued her success at ETSU as she won her match 6-1, 6-3 over Cassidy Hicks. She is now 32-0 while wearing the Blue and Gold. Also picking up a win was Alory Pereira (Sao Paulo, Brazil) as she defeated Kalli Karas 6-1, 6-1 to move to 10-3 on the year. The Middle Tennessee State University transfer has won eight straight matches, which is currently the second highest on the squad.

Markesini was the final Buccaneer to win in straight sets as she won 7-5, 7-5 over Catherine Martin in the No. 1 position. Esguerra and Viccars rounded out the wins for ETSU as they won their respective singles matches in three sets.

The next match for ETSU will be Saturday at Furman. Currently the Bucs and Paladins sit tied for first in the SoCon standings at 5-0. Both teams only have two remaining conference matches, so the winner of the match Saturday will earn the No. 1 seed in the Southern Conference Championships.