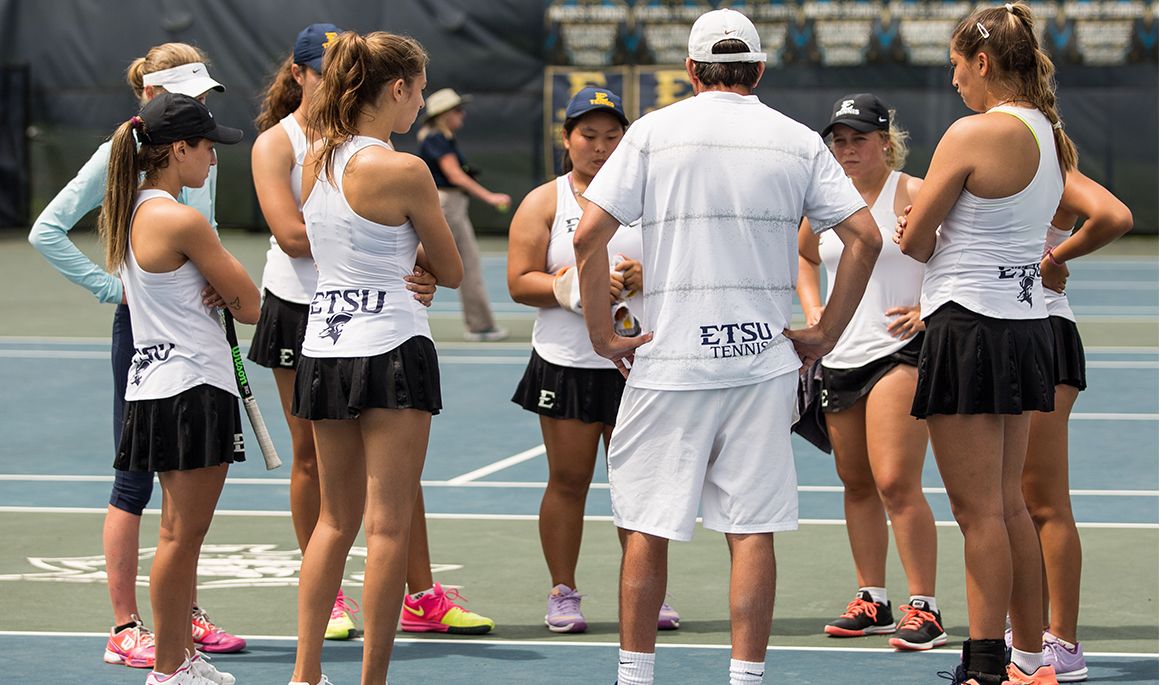 JOHNSON CITY, Tenn. (April 20, 2017) – After concluding the regular season 12-5 overall and 6-1 in the Southern Conference, the No. 2 ETSU women’s tennis team will travel to the SoCon Tournament as the Bucs will face off with No. 7 Wofford in Spartanburg, S.C. on Friday, April 21 at the Reeves Tennis Center at 1 p.m.

As a team, ETSU has posted a 63-34 overall singles record including a 30-12 mark in conference play. Headlining singles play is Guinart who is undefeated at ETSU – 34-0. This season the sophomore is 15-0 and 7-0 in the SoCon playing mainly out of the No. 2 slot.

Markesini sports an 11-5 overall record and is 5-2 in the SoCon playing mainly out of the No. 1 flight for ETSU. In the last two matches of the regular season, Markesini transitioned into the No. 2 slot where she went 2-0 against opposing players.

Melissa Esguerra (Derrimutt, Australia) turned her season around as she concluded her regular season going 8-2 in her last ten matches and is currently on a four-game winning streak.

Pereira has the second-best conference record at 6-1 as she boasts a 12-4 overall record playing mainly out of the No. 3 position.

Guinart and Markesini have played solely out of the No. 1 positon for ETSU in doubles play as they sport a team-best 12-4 overall record and 5-1 SoCon record. Ma and Pereira finished the regular season with a 10-6 mark playing in the No. 2 flight for the Blue and Gold.

Wofford comes into the quarterfinal round with an 11-12 overall record and a 1-6 SoCon record. The Terriers are 8-4 on their home court, but ETSU ran past Wofford on April 6 in Spartanburg as the Bucs upended the Terriers 6-1.

Cassidy Hicks is the leader for Wofford in singles competition as she sports a 14-8 overall record. She sports a 4-3 SoCon mark playing solely out of the No. 2 flight. Just behind her is Curran Carver who is 13-6 overall this year. She matched her teammate with a 4-3 conference record playing out of the No. 6 flight.

The No. 1 and No. 2 positions for Wofford are a combined 27-17 this season in doubles tennis. Hicks and Kalli Karns are 14-9 this year out of the No.1 slot. The tandem also sports a 4-3 SoCon record as they are 6-4 in their last ten matches.

Catherine Martin and Lauren Reid are the No. 2 duo for the Terriers as they are 13-8 on the season.

The quarterfinal round for the SoCon Women’s Tournament is being hosted in Spartanburg on the campus of Wofford College. The semifinal and championship rounds will transition to the Mickel Tennis Center on the campus of Furman University.