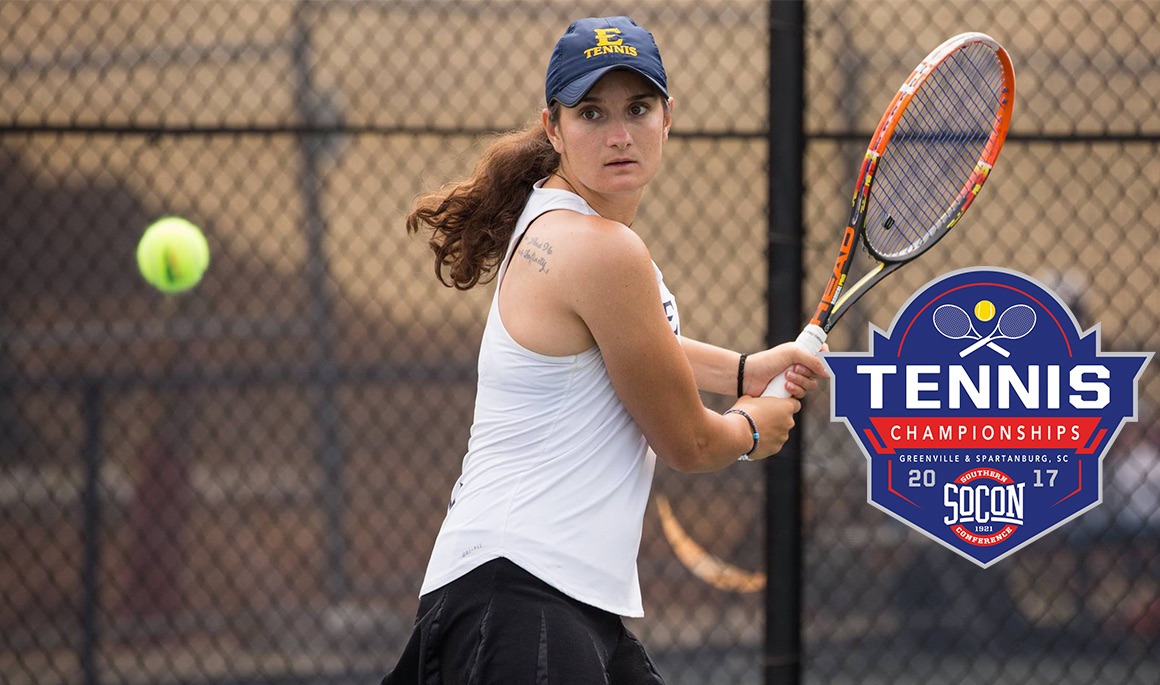 Bucs out-dueled by No. 1 Furman in SoCon Championships
Related Links

GREENVILLE, S.C. (April 23, 2017) – After racing through the first two rounds of the Southern Conference Tournament in Spartanburg and Greenville, S.C., the ETSU women’s tennis team saw its run come to an end as the Bucs were out-dueled by No. 1 Furman 4-2 inside the Mickel Tennis Center.

The Bucs gave a valiant effort in the championships, but the Paladins proved to be too much for the Bucs as Furman earned the SoCon’s automatic bid to the NCAA Tournament.

Furman set the tone early as the Paladins ran past Jayde Viccars (Glen Waverly, Australia) and Melissa Esguerra (Derrimutt, Australia) 6-3 in the No. 3 slot for doubles. However, the Blue and Gold quickly retaliated with a dominating 6-2 win by Marina Guinart (Castellar Del Valles, Spain) and Ioanna Markesini (Athens, Greece) in the No. 1 flight. The No. 2 position for both teams was a battle. Furman’s Katty Weymouth and Danni Vines earned the narrow victory as they defeated ETSU’s Alory Pereira (Sao Paulo, Brazil) and Yi Chi Ma (Kaohsiung, Taiwan) 7-6 (7-2).

Despite being down 1-0, Markesini evened the match for ETSU as she raced past Weymouth 6-2, 6-2 in the No. 2 flight. The victory was her fourth straight with all four coming out of the No. 2 position.

Furman quickly broke the tie as Katarina Kozarov defeated Ma in three sets: 3-6, 6-1, 6-3. However, the Bucs bounced back as Esguerra cruised past Hannah Ferrett 6-0, 6-0 in the No. 5 flight.

With her unbeaten career record on the line (36-0), Guinart, unfortunately, saw that stretch come to an end as she tried to battle past the SoCon Player of the Year, Ansley Speaks. The Spain native battled back after dropping the first set 7-6 (7-4) as she won the second set 6-2. However, Speaks shutout Guinart in the third set 6-0 to give Furman the narrow 3-2 team lead.

In the No. 3 singles, Pereira and Vines posted a three-set battle. Vines won the first set 6-3, but Pereira posted a 7-5 victory to even the head-to-head match. After being down 5-0, Pereira won four straight to put pressure on Vines. However, Vines won the final game to lift Furman to a 4-2 team victory in the SoCon Championship.

The tournament title was Furman’s first since 2008 and its 17th overall championship.