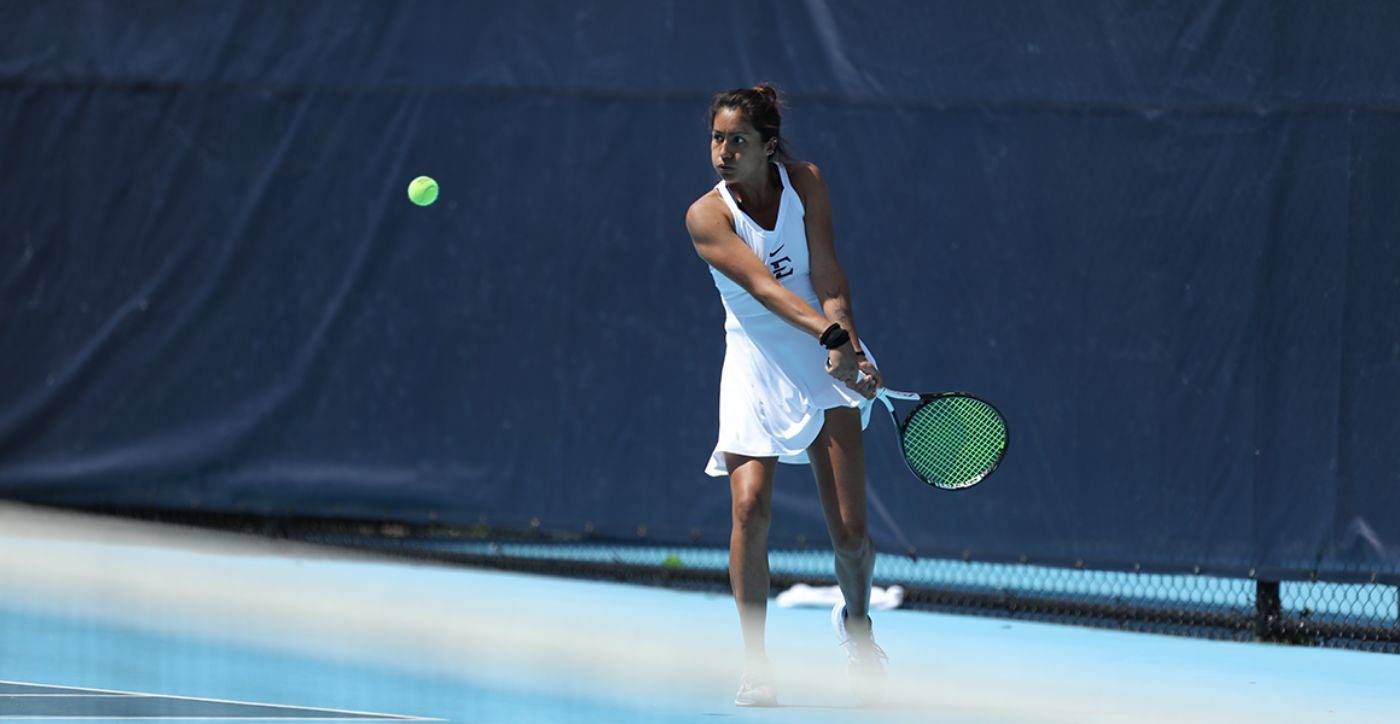 Carvajal goes to R16 in singles, quarterfinals in doubles

MURFREESBORO, Tenn. (Oct. 25th, 2021) – With a couple of upsets already in the bag, the ETSU women’s tennis team made a statement this past weekend on the campus of Middle Tennessee State at the ITA Ohio Valley Regionals tournament. The pair of Fernanda Carvajal (Queretaro, Mexico) and Yuneun Elizarraras (Cuernavaca, Mexico) showed grit and execution to go past the #3 seed pair from Vanderbilt 8-6, but couldn’t keep their momentum against the eventual doubles champion from Indiana.

Carvajal and Elizarraras knocked off the #9 seed pair from Cincinnati in the opening round 8-4 and mustered up another tough win against a pair from Miami (OH) 8-7 (1) before their round of 16 victory against one of Vanderbilt’s pair to set up a quarterfinal match against a pair fresh off defeating the #5 seed pair from Kentucky. Laylo Bakhodirova (Tashkent, Uzbekistan) and Alejandra Morales (Santiago, Chile) got a couple of wins in their part of the bracket, defeating pairs from UT-Martin and Memphis before falling in the round of 16 to a pair from Xavier.

On the singles side of the tournament, five of the seven ETSU players got their opening-round win. Bakhodirova, Carvajal, and Emilia Alfaro (Azul, Argentina) each made it to the round of 32 with Alfaro knocking off the #5 seed Eleonora Molinaro (Tennessee) 6-2 4-6 7-5. Alfaro would lose in straight sets to Vanderbilt’s Dasha Kourkina 6-2 6-1. Bakhodirova, tabbed as the #9 seed, knocked off Louisville’s Tatiana Simova and Butler’s Meredith Roberts to create a round of 32 match with Tennessee’s Olivia Symons that Symons took 6-4 6-4.

Carvajal was the lone ETSU player to make it to the round of 16, but she didn’t have an easy road to get there. The junior started the tournament with a 6-3, 6-3 win over MTSU’s Love-Star Alexis, which set up a contest with Vanderbilt’s Amy Stevens the following day. Carvajal won that match emphatically 6-2 6-3, only to play a couple of hours later against Xavier’s Kat Lyman, who received the #9 seed in the singles tournament. Carvajal came out victorious (4-6 6-4 6-2) despite dropping the first set, going into a round of 16 match with Purdue’s Csilla Fodor. Fodor, the #3 seed in the singles tournament, ended the junior’s run with a win in three sets (6-2 5-7 6-4).

As the team’s fall schedule comes to a tentative end, the group will look to the spring schedule and prepare for conference play and avenge their championship loss to Furman.