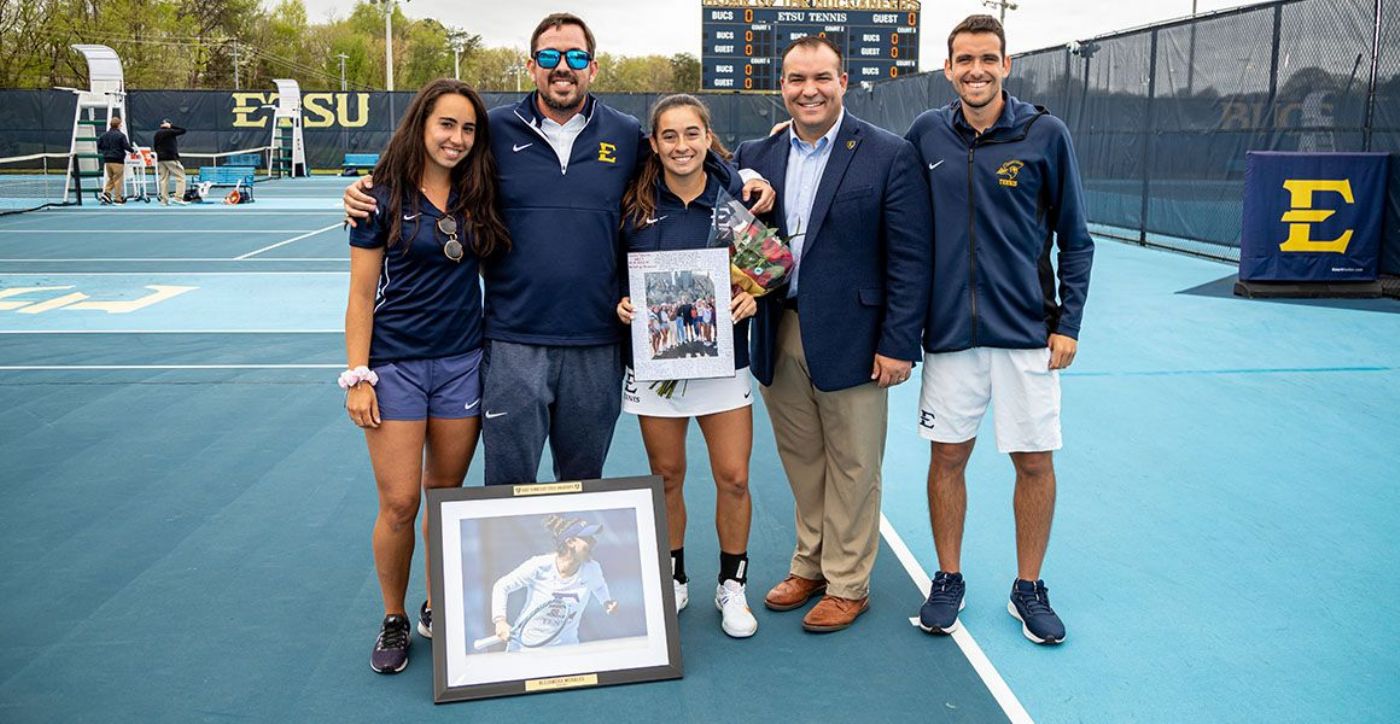 In what was lining up to be a perfect story with the Buccaneers cracking the ITA Rankings a week ago and the top two unbeatens in Southern Conference play meeting in the final match of the regular season, ETSU couldn’t pull off the upset. With the loss, the Blue and Gold – who had their five-match win streak snapped – moved to 15-8 overall and 6-1 in conference play.

The Bucs earned the No. 2 seed in next week’s conference tournament, which will be held in Chattanooga. Furman won the regular season title and the number one overall seed in the SoCon Tournament as the Paladins improved to 18-6 overall and 7-0 in league play.

ETSU fell behind early as the Bucs dropped the doubles point.

Fernanda Carvajal (Queretaro, Mexico) and Daniela Rivera (Maturin, Venezuela) got the Bucs off to a strong start as they won 6-1, marking their 10th straight doubles win. However, Laylo Bakhodirova (Tashkent, Uzbekistan) and Alejandra Morarles (Santiago, Chile) suffered a 6-4 loss to No. 32 Julia Adams and Ellie Schoppe, resulting in the point coming down to the No. 2 pair. Unfortunately, Emilia Alfaro (Azul, Argentina) and Mayya Gorbunova (Moscow, Russia) were edged by Madison Dillon and Ellie Schulson, 6-4.

With their backs against the wall, the Bucs had to dig deep if they want to deliver Furman’s first conference loss since 2015 when ETSU defeated the Paladins, 5-2.

ETSU pulled even at 1-1 thanks to a win by Alfaro as she defeated Dillon, 6-3, 6-2. Alfaro won all seven of her SoCon matches in straight sets this season.

With the match tied up, Furman pulled back ahead when Sara Snyder defeated Carvajal in straight sets on Court Three. Snyder won 6-4 and 6-1. The Paladins then pulled one point away from clinching the conference won win Jess Dawson won on Court Six over Yunuen Elizarraras (Cuernavaca, Mexico), 7-5, 6-4.

The clinching point came on Court Two with Morales – who was playing her final home match – falling to Schoppe. Morales set the tone early by winning the opening set 6-3, but Schoppe quickly evened things up with a 6-2 win in the second. In the all decisive third set, Morales jumped ahead early but couldn’t sustain momentum as Schoppe rallied for a 6-3 victory.

Rivera won her match over Schulson (6-1, 3-6, 6-3) on Court Five, but Bakhodirova saw her five-match win streak come to a halt on Court One, as she suffered a three-set loss to No. 61 Julia Adams. After dropping the first set 6-1, Bakhodirova – ranking 102nd nationally – fought back to win the second, 7-5; however, Adams finished things off with a 6-3 win in the third.

The Bucs will now take on seventh-seeded UNCG in Thursday’s quarterfinal match of the SoCon Tournament. First serve is set for 10:30 a.m. from the Champions Club in Chattanooga.