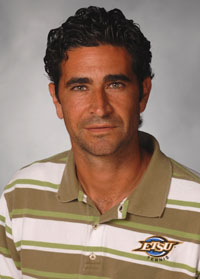 Yaser Zaatini enters his fifth season as Director of ETSU Tennis, serving in his 14th year as head coach of the men's team.

Zaatini was initially named the assistant coach of the men’s tennis program in the fall of 2002, but took on the larger responsibility of head coach after former head coach Dave Mullins was named as the Director of Intercollgiate Athletics at ETSU. Since being named the men's head coach, the eight-time conference “Coach of the Year,” has not only sustained the Bucs great tennis tradition but he has pushed it to a new level, winning 15 conference championships and has made 12 trips to the NCAA Tournament, while compiling a 244-96 overall record (.718 winning percentage). On July 9, 2010, Zaatini was named the Director of Tennis at ETSU, gaining direct oversight for both the Buccaneers’ men’s and women’s tennis programs.

In 2011-12, Zaatini coached the ETSU men's team to their sixth consecutive Atlantic Sun Tournament Championship. The Buccaneers finished the season with an overall record of 14-9, but were a perfect 9-0 in Atlantic Sun play to earn the regular season championship and the conference tournament's top seed. Zaatini earned his third Atlantic Sun Coach of the Year award, leading the Bucs to the NCAA Tournament against fifth-seeded Ohio State. The men's team was ranked in 10 of the ITA's 16 polls, ending the year at No. 72 and earning a season-high mark of No. 58. Zaatini's women's team advanced to the Atlantic Sun Tournament Championship finals as well, and nearly pulled off a comeback but ultimately fell short to North Florida. The women finished the season with a mark of 12-9, 7-2 A-Sun.

In 2009-10, the Bucs finished the season with a 16-8 overall mark, which included an A-Sun Tournament title and a historic victory over Alabama in the NCAA Tournament. The Bucs also finished the year as the No. 32 ranked team in the country, while junior Charles Bottoni became just the third Buc in history to earn an individual trip to the NCAA Singles Championship.

In 2009, Zaatini added to the Buc legacy after ETSU posted a 13-8 record, while going unbeaten in Atlantic Sun Conference action again. After sweeping both the A-Sun Regular Season and Tournament titles, Zaatini helped the Bucs extend its A-Sun winning streak to 34 straight matches. Under Zaatini, six Bucs earned all-conference honors in 2009, while former standout Enrique Olivares earned the highest ITA ranking in conference history. Overall, Zaatini’s leadership was evident a season ago as ETSU earned its third straight trip to the NCAA Tournament, while ETSU picked up road wins at No. 38 Wisconsin, while Olivares won the prestigious Southern Intercollegiate tournament.

In 2008, Zaatini continued to lead his to team to wins as the Bucs again went unbeaten in A-Sun play, winning the regular and tournament conference championships. More importantly ETSU dropped Big East conference champion Norte Dame 4-2, in the first round of the NCAA Championships. This marked the first-ever victory for ETSU in the NCAA tournament, as the Bucs finished with a program-best ITA rankings of 37th nationally and seventh regionally. Overall, Zaatini was again named A-Sun Coach of the Year, after the Bucs finished with a 25-4 overall record.

In its previous year Zaatini led ETSU to a 23-5 overall record, while going a perfect 8-0 A-Sun conference play, winning both the regular season and championship titles. Zaatini’s 2007 team defeated No. 31 MTSU, as well as San Francisco, Texas-San Antonio, Nebraska and Wichita State. The Bucs also collected 14 shutout victories, including all eight against conference opponents in both the regular season and league tournament. The 2007 team also wound up in the ITA National Rankings again for the sixth year in a row, at No. 51, as well as a No. 13 regionally.

Before competing fully in the A-Sun, Zaatini led the Bucs to a 20-4 overall record in 2005, while going undefeated for the second consecutive year in SoCon play, extending their SoCon winning streak to 26-0. Zaatini was named the Southern Conference Coach of the Year for the second consecutive season as the Bucs made their fourth NCAA tournament dropping a close match to No. 14 Tennessee.

In 2004, Zaatini led the Bucs to their third NCAA appearance and first of his career as the men’s tennis program went 20-6 overall and was undefeated in SoCon play (10-0), winning both the regular season and championship titles. Zaatini would go on to earn his first of four career “Coach of the Year,” awards.

As a player, Zaatini was the first individual from ETSU to compete in the NCAA Championships and is the only four-time Southern Conference tennis champion in No. 1 singles. In 1992, he was ranked as high as four in the nation in the ITA rankings, the highest ever for a Buccaneer tennis player. Zaatini was also a two-time ITA All-American (1992, 1993), becoming one of four Bucs to earn that prestigious title -- the other being Enrique Olivares in 2008, and David Biosca and Rogerio Ribeiro in 2016.

After graduation Zaatini became a member of the Association of Tennis Professionals (ATP). He made appearances in the 1994 and 1995 Davis Cup tournaments, representing his home country of Venezuela.

He returned to ETSU prior to his head coach assignment in the fall of 1996 to serve as a volunteer assistant with the Buccaneer program. Zaatini then went back to play professionally in Venezuela while managing the Zaatini Tennis Academy in his hometown of Maracay. He has served as the director of the academy for the last six years where Zaatini has taught nationally and internationally ranked juniors and professionals alike.

Zaatini is a 1993 graduate of East Tennessee State University and in 2004 Zaatini was recognized formally for his accomplishments when he was inducted into the ETSU Athletics Hall of Fame. Currently, Zaatini resides in Johnson City with his wife Gloria and their three sons, Yaser, affectionately known as “Yaby,” Sebastian, and Giancarlos.