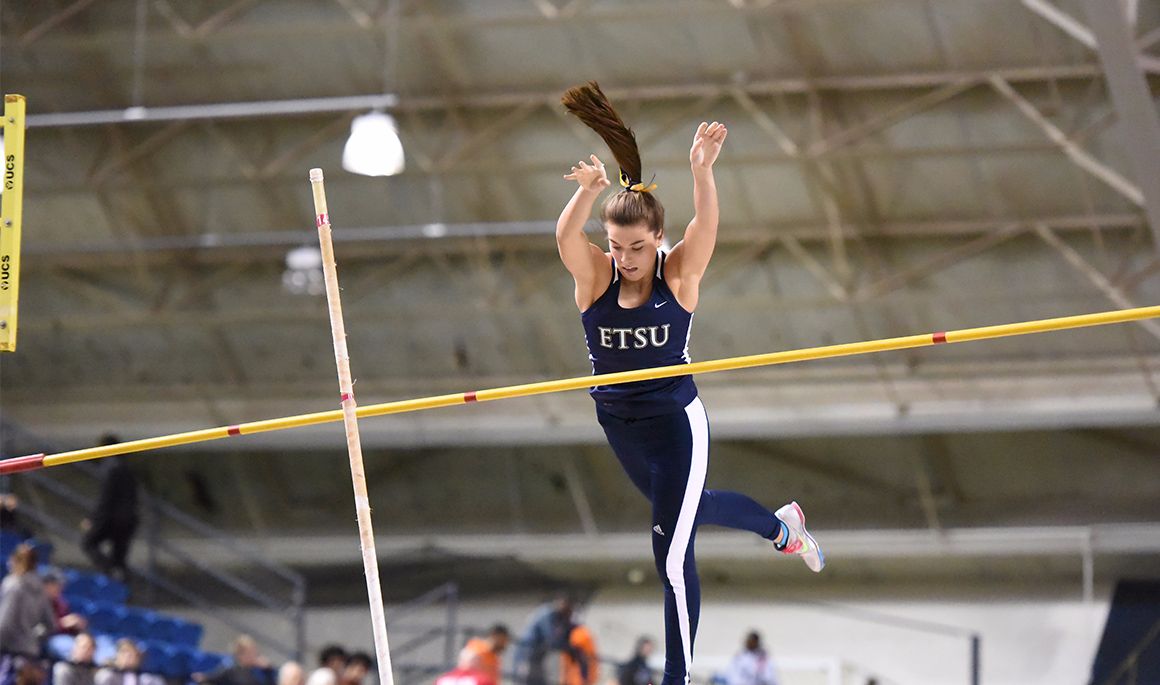 Kessler Wins Pole Vault to end weekend at Georgia Tech
Related Links
ATLANTA, Ga. (April 23, 2016) – On the final day of the Georgia Tech Invitational in Atlanta, Ga., the ETSU Track and Field team captured four top five finishes with senior Ashley Kessler (Knoxville, Tenn.) coming away victorious in the women's pole vault.
Kessler captured her second victory in the pole vault his season with a mark of 3.90 meters as it is the highest mark of the outdoor season for Kessler.
"We had a solid day highlighted by Kessler win in the pole vault," said director of track and field George Watts. "Kessler along with Brett Squibbs are very close to breaking school records."
The second top five finish of the day came from the men's 4x100 meter relay as the team of junior Matthew Moore (Oak Ridge, Tenn.), junior Patrick Taylor (Chattanooga, Tenn.), senior A'Darrius Sanders (Knoxville, Tenn.) and junior Mike Williams (Mt.Laurel, N.J.) finished fourth with a time of 41.69.
Williams followed up his performance on the relay team with a top five finish in the 400 meter hurdles, placing tied for fourth with a mark of 51.27.
"Mike Williams had a nice personal best in the 400 meter hurdles to solidify his spot for the NCAA East Regional Prelims," said Watts.
On the women's side, freshman Kiana Davis (Ooltewah, Tenn.) grabbed a top 20 finish, placing 20th with a time of 25.19 in the women's 200 meter dash.
Ending the day was the men's 800 meter where the Bucs placed two in the top 20 as senior Thomas Miller (Lithonia, Ga.) placed third out of nearly 65 runners with a season best time of 1:51.23. Junior Simeon Roberts (Greeneville, Tenn.) recorded a time of 1:54.45 to finish 17th.
"We have some sharpening up to do for our last meet and then rest up as we move closer to the conference championship," said Watts.
Next weekend, the Blue & Gold will prepare for it's final meets before the Southern Conference Championships as the Bucs head to Cullowhee, N.C. for the Western Carolina Invitational on Friday, April 29. ETSU will then switch gears on Saturday and head to Boone, N.C. for the Mountaineer Outdoor Open.
The Southern Conference Championships will be held in Cullowhee, N.C., May 12-13.
For more information on Buccaneer Track and field, visit ETSUBucs.com and click on the track and field pages.