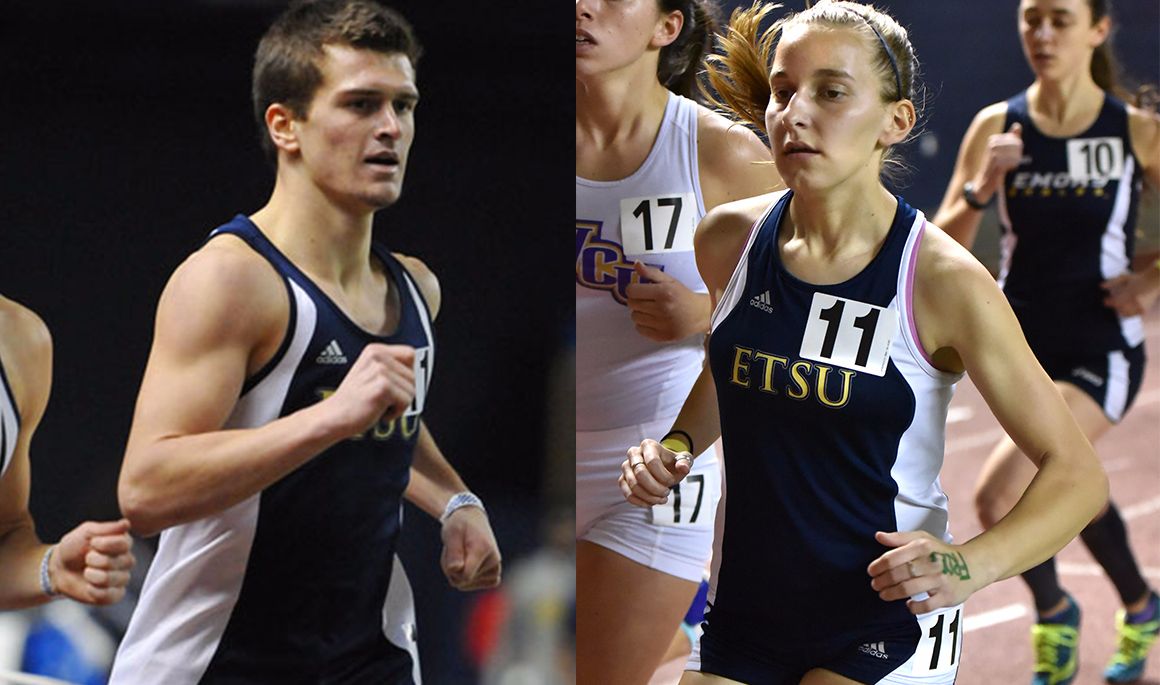 CULLOWHEE, N.C. (April 29, 2016) – On the track that is home to the 2016 Southern Conference Championships, the ETSU Track and Field program had an outstanding day at the Western Carolina Invitational on Friday recording seven event victories.
Overall after 18 events scored the ETSU men's team placed second with 141 points while on the women's side the Bucs finished fourth with 78 points.
"I am pleased with our final meet before the conference championships We had several winners and quite a few personal bests," said director of track & field George Watts.
For the second straight meet senior Ashley Kessler (Knoxville, Tenn.) recorded a victory in the women's pole vault. The SoCon Field Athlete of the Week finished first with a mark of 3.85 meters and extended her streak to 10 straight meets with a top ten finish.
Starting off the day was freshman Kyra Atkins (Greer, S.C.) who recorded the first victory of her career in the women's 100 meter hurdles with a mark of 13.88. Atkins also competed in the field finishing fifth with a season best mark of 5.55 meters.
Sophomore Macy Carrier (Bluff City, Tenn.) had an outstanding day coming away victorious in the women's 3000 meter run with a time of 10:44.27. The sophomore also collected two personal bests in the 100mH (15.65) and 1500m (4:51.95).
On the men's side, sophomore Haydn Borghetti-Metz (Rogersville, Tenn.) ran a season best time of 4:00.46 in the men's 1500 meter to claim the victory. Behind Borghetti-Metz was freshman Nick Horne (Blountville, Tenn.) finishing third with a collegiate best time of 4:05.99.
In the 3000 meter run, the Blue and Gold had the top four finishers with junior David Winchester (Knoxville, Tenn.) earning the victory with a collegiate best time of 8:39.08. Following Winchester was senior Matthew Joyner (8:46.64), freshman James Garst (8:49.94) and sophomore Daniel Sonnenfeldt (8:51.79).
For the first time in his career sophomore Benjamin Johnson (Nashville, Tenn.) competed in the men's javelin and recorded a victory with a throw of 56.42 meters.
"It's good to get Ben Johnson back after sustaining a very serious injury in our first indoor meet of the season," said Watts. "His javelin mark currenly ranks second in the conference."
The final victory of the day for the Buccaneers at the Western Carolina Invitational came in the field as junior Brett Squibbs (Rock Hill, S.C.) recorded his second victory of the season in the men's pole vault with a mark of 4.95 meters.
ETSU is back in action tomorrow in Athens, Ga. for the Georgia Invitational. The meet will get started at 9:30 a.m. with the women's 5000 meter run. The first field event begins at 10:00 a.m. with the women's hammer throw.
"It was good to get another look at the conference meet sight," said Watts. "We are looking forward to our return in two weeks."
Other Performances for ETSU
Men
- Jacob Dunlap collegiate best mark of 48.56 meters in men's hammer throw
- Dunlap finished third in shot put with a mark of 13.02 meters
- Benjamin Johnson placed fifth in shot put with a mark of 12.28 meters.
- Patrick Taylor placed second in men's 200m with a time of 22.10.
Women
- Nicki Smith finished ninth with a collegiate best time of 59.41 in 400m
- Katie Hirko placed third in 1500m with a time of 4:46.12
- Timia Easley recorded a season best mark of 5.34 meters in the long jump
-Easley had collegiate best mark in triple jump at 11.66 meters to finish third
- Emily Armstrong finished fourth with a throw of 32.26 meters in javelin
- Victoria Hutchens placed second in the 3000m with a time of 10:47.21
For more information on Buccaneer Track and field, visit ETSUBucs.com and click on the track and field pages.