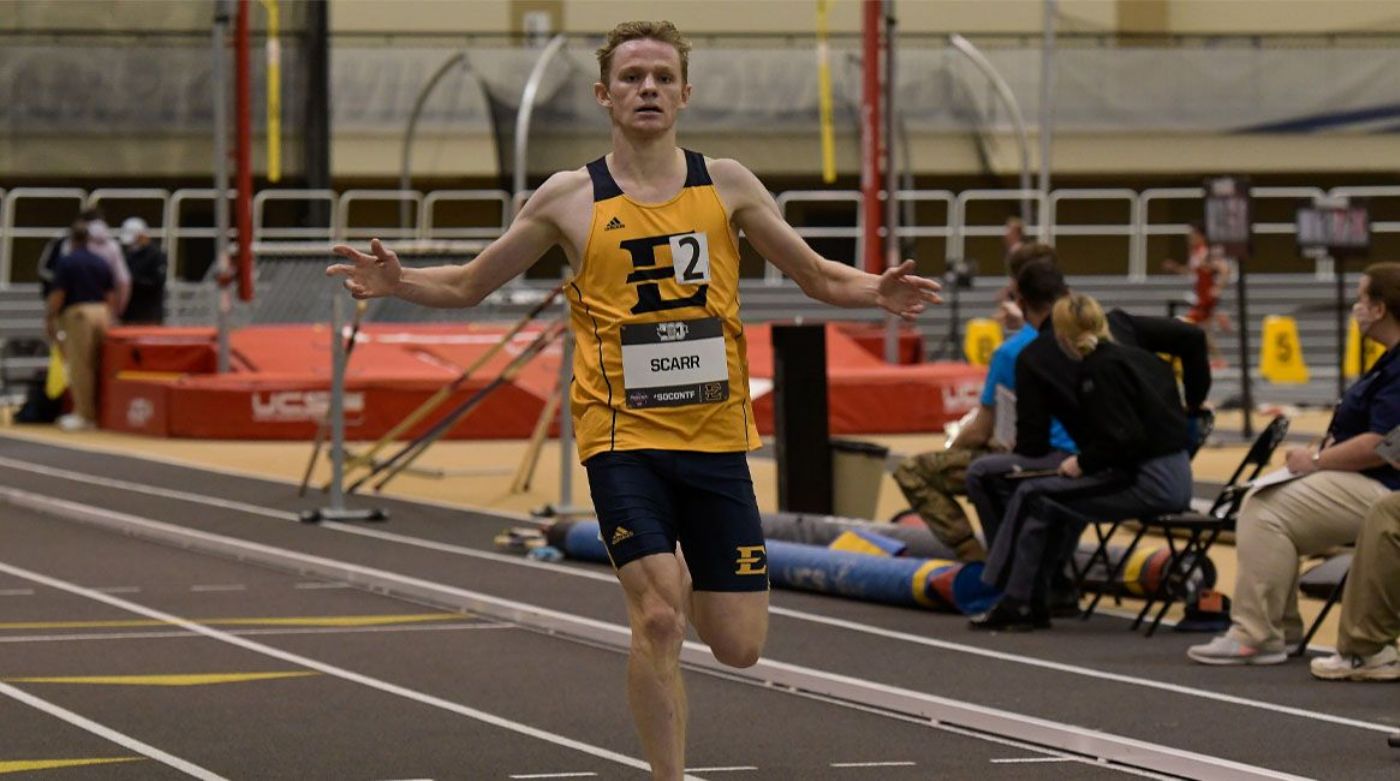 Matt Scarr paces the men with a first-place finish in the 3000m, Lindsay Cooper and Nicole Johnson set for productive day two with two finals

Scarr captured his first individual SoCon Championship gold medal by taking down the powerful Furman quintet en route to becoming the 11th different Buccaneer to win the SoCon 3000m run. Scarr, who was on ETSU’s championship DMR team at the 2018 conference meet, won Saturday’s race with a time of 8:24.38, with a group of five Furman runners following behind – the nearest competitor crossing the line in second-place at 8:27.77.

With ETSU having a rich history of 3,000m SoCon champions, including three-time winner Seamus Power holding the SoCon record of 8:05.37, Scarr also joins the likes of Adrian Leek, Brian Dunne, Thomas O’Gara, James Hynes, Dennis Barry, Declan Fahy and Brad Yewer to win gold in the event. The Bucs, who won the even for seven straight years from 1988-94, have now captured gold in the 3,000m twice in the last three championships.

“We had some solid highlights from today's competition, led by Matt Scarr's win in the 3000m run,” said Director of Track & Field George Watts. “It was a tactical race and Matt made the right move at the right time to win convincingly.”

As a team after the opening day of competition, both the ETSU men and women sit fifth overall. The men totaled 16 points and the women accumulated 31.5 points. Western Carolina holds the men’s team lead with 58.5 points and Samford sits atop the women’s leaderboard, also at 58.5 points.

“A conference track and field meet has its ups and downs throughout the two-day competition,” said Watts. “Things don't always go your way, but hopefully more good things happen than not. I felt that was the case for the Bucs today. Both teams competed hard and that's all we as coaches can ask of our student-athletes. We have a lot to look forward to tomorrow and all we can do is line up and go for it.”

Freshman Lindsay Cooper (Charlotte, N.C.) is also enjoying her first conference championship meet as she won the prelims in the 60mH, clocking in at 8.63, while also advancing to Sunday’s finals of the 400m with a time of 57.74.

“We had the fastest qualifiers in three events as Nicole Johnson led the way in the 60 and 200 and freshman Lindsay Cooper ran a personal best to lead the way in the 60m Hurdles,” added Watts. “Lindsay came back and qualified in the 400m, and Jessica Lord and Julia Karsten advanced in the 800m. We have an opportunity to score in 10 of the 11 finals scheduled for tomorrow.”

Coach Watts on the men's performances...

Despite our limited squad size, we came close to qualifying just about everyone to tomorrow's final that we realistically could and have a chance to score in seven events. Leading the way were Miguel Parrilla and Phelani Maduwa in the 800 and Matt Scarr, Evan Guzman, and Josh Krafsur in the Mile Run. Kameron Walsh overcame a bad start but still advanced in the 60m Hurdles.  Our other scoring possibilities include the triple jump, 5000m and 4x400m relay.

The one area I'm most pleased with is the competitiveness of the men's team.  They have a seriousness about them and care about doing well for each other and ETSU.

Coach Watts on the women's performances...

The women's team had a very good day of competition both in scoring events and qualifying races. The scoring highlights include a podium finish by the DMR team of Colbie Williamson (1200m), Johnaida Eliscar (400), Jessica Lord (800) and Genevieve Schwarz (1600).  Other scorers included Kendra Whitehurst, Mekayla Brown and Molly Rhudy in the long jump. Its Kendra's highest finish in a conference meet and a first-time scorer in Molly Rhudy. Patra Williams had her highest finish ever in the high jump and Atlantis Warren made a move from eighth to fifth late in the shot put competition for a clutch performance on her part.

Our pentathletes didn't score but had a solid day in their first ever competition in that event. Britney Griffith finished ninth and won the 800m portion of the pent and her overall total would've scored last year. Both she and Marissa have a chance to be scorers in the future.

Like the men, the women qualified about as close to everyone as we could. We had the fastest qualifiers in three events as Nicole Johnson led the way in the 60 and 200 and freshman Lindsay Cooper ran a personal best to lead the way in the 60m Hurdles. Lindsay came back and qualified in the 400m and Jessica Lord and Julia Karsten advanced in the 800m. We have an opportunity to score in ten of the 11 finals scheduled for tomorrow. Overall, we did as well as could be expected and  I look forward to another good day tomorrow.

For a full list of results of the opening day of the SoCon Indoor Championships, use the link on the right side of this page.

Be sure to follow day two’s events by following the ESPN+ stream and live stats.