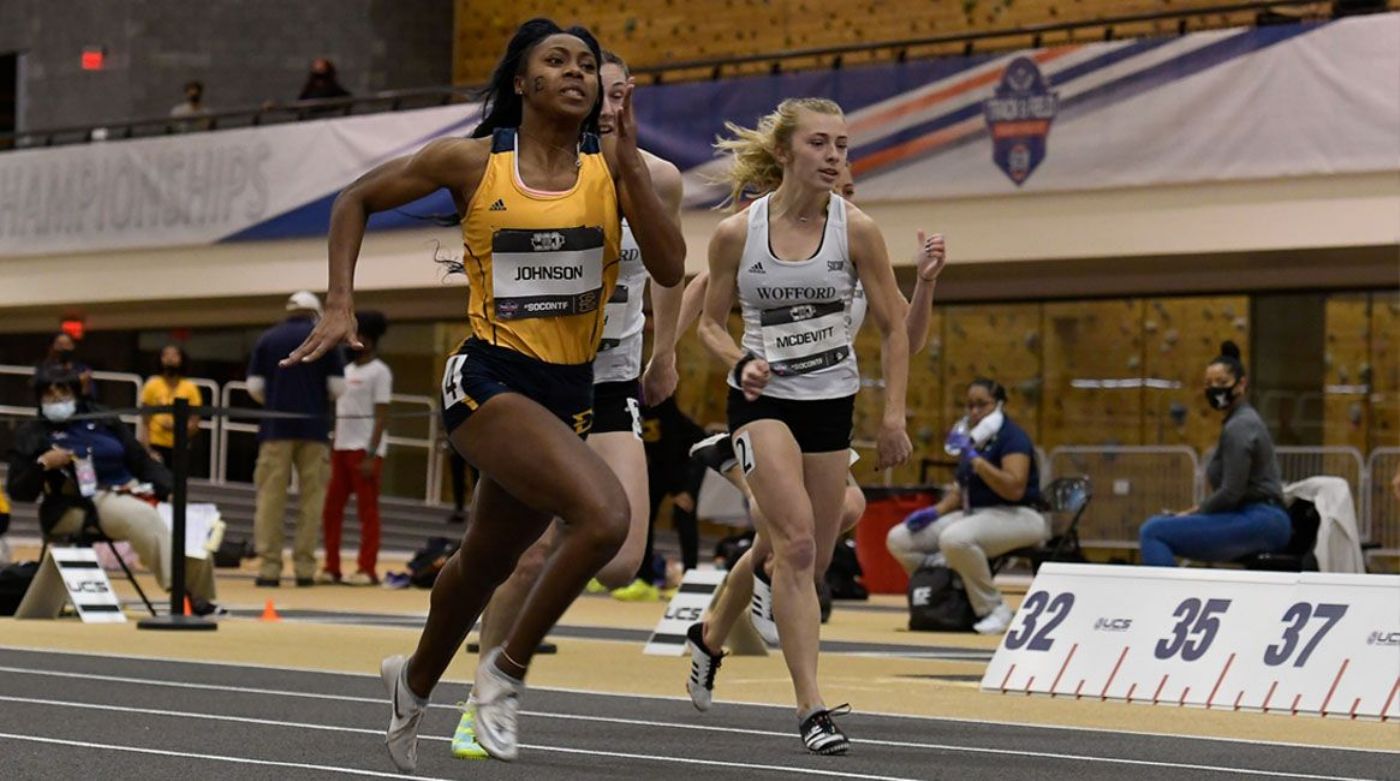 Becoming the first Buccaneer to win the mile since 2009 when Heidi Dahl captured gold, Genevieve Schwarz led the way for the Bucs in the opening track event of Sunday as the junior secured top marks in a 5:01.46 finish. The win marked only her second individual win of her career, also winning the mile last year at the VMI Team Challenge.

"Genevieve Schwarz was our first champion as she won a very tactical Mile with a strong last 440 yards," stated Director of Track and Field George Watts. "Gen has continued to show improvement throughout her career and winning is the next step in her progression."

With the momentum, her teammate Nicole Johnson also put herself in the record books. Nearly topping her meet-setting mark of 7.40s in the 60m dash a year ago, Johnson again cruised en route to a first-place finish to be crowned the fastest woman in the Southern Conference. The sophomore doubled up on the accolades after again dominating in her field, this time earning a pole spot in the 200m dash, her time of 24.37s over .25s faster than second. Johnson becomes the second Buccaneer in history to record wins in both the 60m and 200m dash in the same year, joining Katrina Seymour who achieved the feat in 2017, also winning the 400m that year. Johnson's 22 points on the weekend also ranked joint-most amongst an individual with her two wins in the 60m and 200m and her finish in the 4x400m relay.

"Nicole Johnson led the way with two great wins," said Watts. "I'm proud of how she defended her 60m title and won the 200m for the first time as well as contributing a leg on the runner-up 4x400m relay team."

The men's 4x400m relay team trimmed more than five seconds off their best time of the season, using a youthful side of three sophomores and a freshman to generate their best performance of the year with a fourth-place finish in a competitive conference finals run. Less than two seconds decided the top four teams, ETSU grabbing its fastest split in the anchor spot from Kameron Walsh.

Making the second-biggest jump of the second day behind Samford, the Buccaneer women’s team scored 94 points on Sunday to vault them into a third-place effort, the 125.5 points trailing just Wofford (131) and favorites Samford (155.5).

This marks the fourth straight year that VMI hosted the SoCon Indoor Championships inside their new facility. Since the return to the SoCon, the finish marks the fourth time the women have placed third, adding last season’s silver medal as well.

On the women's team performance

"I thought our women had a very good meet as they battled throughout the day with a very fine team effort.  We had eight podium finishes with three wins, to go along with five other top-three medalists. In addition, we had eight other scorers and numerous personal bests."

On the men's team performance

"I think the men scored as well as could be expected with the limited number of athletes on our squad. Going into the meet I thought 50 points was a reasonable and fair expectation and we accomplished that goal."

"Matt Scarr led the way today in points scored with a sixth in the mile run and completed a very difficult triple with a strong fourth-place finish in the 5k."

"Phelani Maduwa was our lone podium finisher with a third in the 800m while Miguel Parrilla closed hard to grab fourth place with both running indoor personal-bests. Kameron Walsh ran a personal best in the 60yd Hurdles to earn a sixth place."

"Probably the biggest surprise of the day was Noah Shelton finishing fourth setting a personal-best in the weight on his final throw of the competition."

"We had two freshmen score in their first Southern Conference Championship with Malachi Thomas in the high jump and Evan Guzman in the mile run. Evan was also the leadoff leg of our third-place DMR last night. The guys finished off the meet with a season-best and solid fourth in the 4x400m relay with a team of Miguel, Isaiah Mills, Bryce Turnbow and Kameron."

"Lindsay is already showing great promise as she earned two bronze medals in the 60 Hurdles and 400m dash and running a strong leadoff leg in the 4x400."

"Mekayla should be very happy with her performance as she earned runner-up finishes in the 60m and triple jump. Mekayla has a whole lot more she can accomplish, and I look forward to seeing what comes next for her."

"The 4x400m relay was possibly the most exciting race of the meet as there was .25 seconds separating second through fifth. Lindsay, Nicole, Jessica Lord and Johnaida Eliscar found a way to earn the silver medal in a spirited race to end the meet."

For a full list of results of the final day of the SoCon Indoor Championships, use the link on the right side of this page.