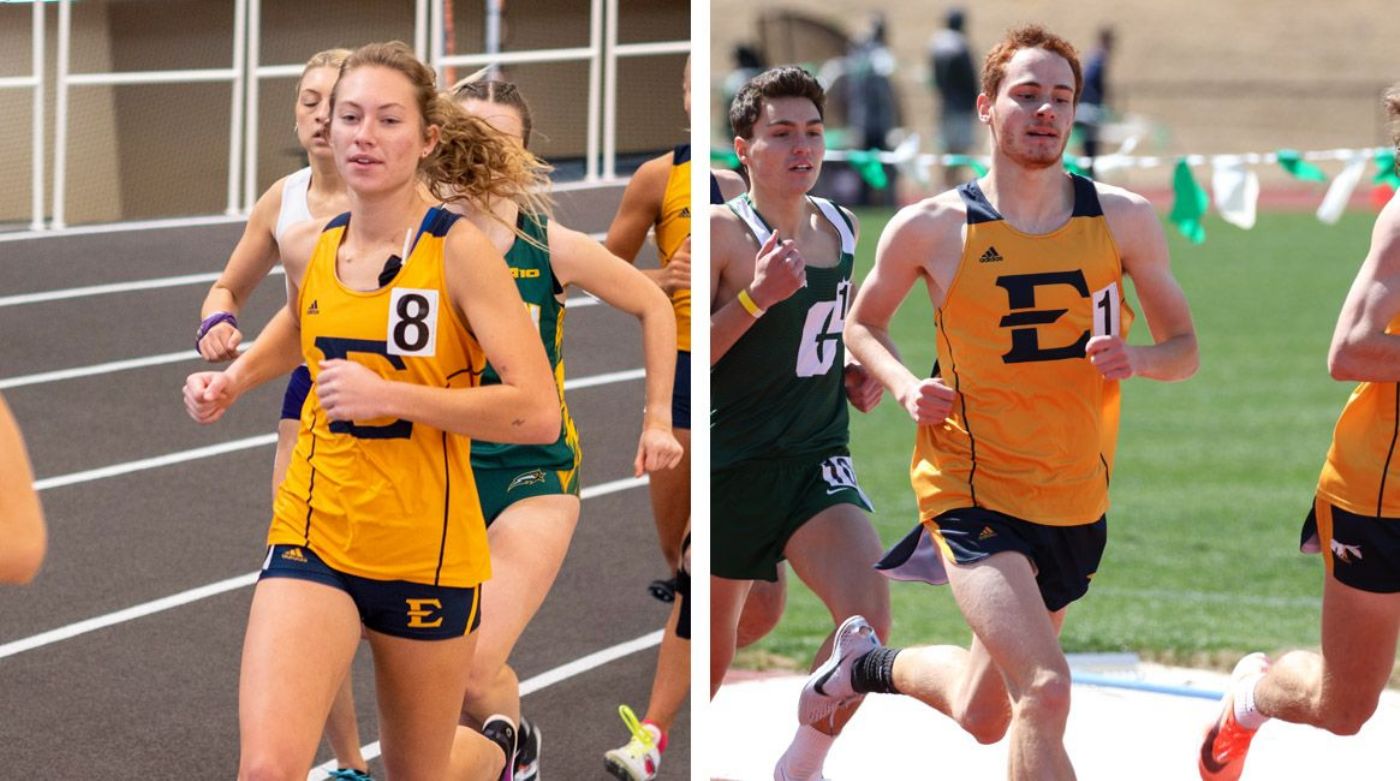 HIGH POINT, N.C. (April 1, 2021) – The ETSU track and field team opened its busy weekend at the VertKlasse Meeting at Dick Vert Stadium on Thursday afternoon, competing in the first of three straight days of action for the Bucs.

The Blue and Gold were highlighted by eight different outdoor individual records being set on Thursday, including a top five finish in both the men’s 1500m and men’s 5000m.

As the hammer throw ended, Marissa Schalk-Salmeron (Granite Falls, N.C.) tied her outdoor record in the high jump, making it two times in two attempts the freshman recorded a mark of 1.45m. Schalk narrowly missed out on her 1.50m indoor mark that she scored on her debut at the VMI Team Challenge in the indoor season.

With the women’s team splitting throwers between two events going on at the same time, a collegiate debut in the javelin saw Mary Brown (Radford, Va.) join the upper half of the women’s field. The junior scored a throw of 31.35m, placing her 10th in a field of 27 competitors. Atlantis Warren (Memphis, Tenn.) represented the Bucs in the shot put, also scoring in the upper half of her field in her first meet of the outdoor season, scoring a 11.30m toss.

The first track event of the day was the 3000m Steeplechase, with only one member of the Blue and Gold running for either team. Dylan Zeller (Hixson, Tenn.) finished with a time of 10:19.49 in his debut in the event.

In one of the busiest events of the day for ETSU, the women had five members compete in the 1500m run. ETSU was led by Makayla Shaw (Jonesborough, Tenn.), her time of 4:46.41 proving to be a personal best by 10 seconds, only three seconds off the pace of a top-three finish. Kiera Snyder (Clyde, Mich.) followed the senior, finishing in 4:50.93 in her first taste of the event in her collegiate career. Julia Karsten (Old Hickory, Tenn.) rounded out the field finishing under five minutes, crossing the line at 4:58.55.

On the men’s side of the action in the 1500m run, Josh Krafsur (Fort Collins, Colo.) led the Bucs with a new personal-best time of his own. His previous mark of 4:03.82 standing since the 2019 SoCon Outdoor Championships, Krafsur knocked off more than three seconds to finish with a 3rd place finish at a 4:00.16 pace in a field of 57 runners.

Finishing off the day’s field events, Caitlyn Cutshall (Kingsport, Tenn.) tied her collegiate best in the pole vault. The sophomore finished her afternoon clearing the bar at 2.80m, equaling her tally recorded at the Buccaneer Track and Field Invitational earlier this indoor season.

Julia Foote (Franklin, Tenn.) made just her second appearance in the Blue and Gold in her freshman season, marking her debut in the 5000m run by leading a trio of Buccaneers with a time of 18:54.53. Lindsay Holliday (Maryville, Tenn.) finished just seconds off her teammate with a time of 18:56.79, while Lindsay Bruce (Knoxville, Tenn.) followed just behind the duo.

Both Buccaneers closing the day for the Blue and Gold set personal records in the men’s 5000m. Seth Bowden (Maryville, Tenn.) posted the fifth best time in the event, his mark of 15:20.15 setting a new outdoor-best for the junior in the event. Jordan Thomas (Knoxville, Tenn.) cut over half a minute off his previous best set at the 49er Classic two weeks ago, finishing in the top half of the field with an eighth place finish of 15:39.84.

For full results of today’s events and a start list of tomorrow’s schedule, check ETSUBucs.com. Live video on ESPN+ will be available for tomorrow’s events in High Point, found at the link here.

The Bucs also compete in the first day of the UAB Spring Invite on Friday, a small group of Bucs competing in the opening day of events.