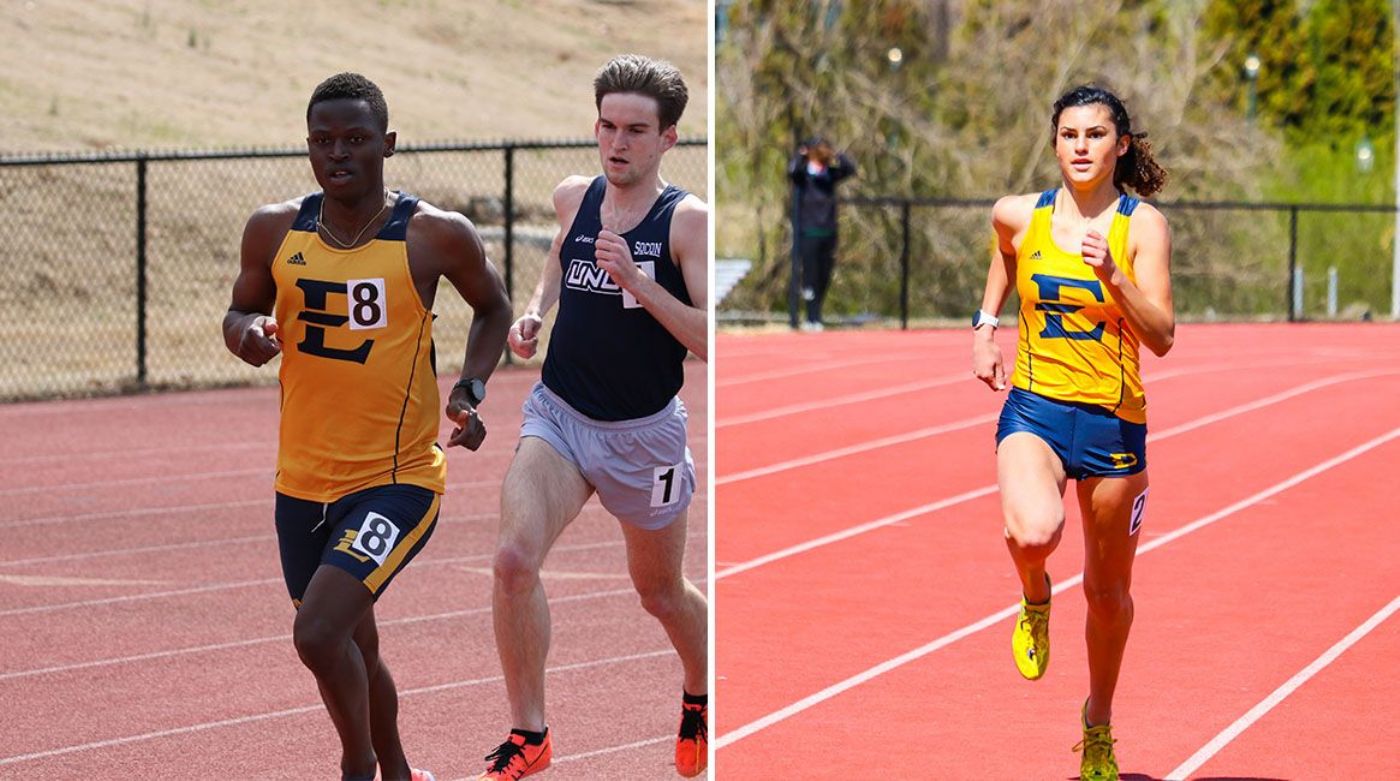 KNOXVILLE, Tenn. (April 9, 2021) – With impending inclement weather on the horizon in Knoxville, the ETSU track and field team adjusted on the fly to schedule changes on the second day of the Tennessee Relays.

Officials expect Mother Nature to cause a shift in weather conditions in Knoxville for Saturday’s conclusion of the meet, causing field events and some relays to be pushed to the evening portion of Friday’s action.

The Bucs got their day started in the women’s 100m hurdles by way of Lindsay Cooper (Charlotte, N.C.). After a strong showing in her season debut last weekend at the UAB Spring Invite, the freshman finished in a time of 14.15s to enter the top half of the field. The time secured her fastest in her young career, beating her previous mark of 14.29s. Cooper remained busy, entering in the 400m hurdles just an hour later. Just two tenths of a second off her best time in the event, Cooper crossed the line sixth with a 1:03.73 time.

Isaiah Mills (Freeport, Fla.) got the men’s side started on the weekend just after the 400m hurdles, making it back-to-back weeks the freshman has entered the 400m dash. Mills just finished off his pace set last week, recording a time of 50.09s.

The Bucs secured their first top-five finish of the meet through Phelani Maduwa (Parys, Free State, South Africa). Maduwa set a new personal record with a 1:49.55 time in the 800m race that secured him fourth place, less than a second off leader Alex Kay, who finished with a 1:48.75 time on his home track. Miguel Parrilla (Knoxville, Tenn.) finished just outside of the top ten, crossing the finish line in 1:52.95.

Jessica Lord (Morristown, Tenn.) paced a trio of Buccaneers in the women’s 800m, finishing in 2:10.32 to set a new personal record. The junior’s time was just a second off a top five finish. Sophomore Julia Karsten (Old Hickory, Tenn.) also broke her best time, finishing the event with a mark of 2:14.92. Heather Feuchtenberger (Elizabethton, Tenn.) rounded out the group of Buccaneers, the senior continuing to cut her time down with her second straight performance garnering a seasonal best with a 2:16.09 finish. The three events in the early outdoor season have been Feuchtenberger’s first competitions since the SoCon Indoor Championships in the 2020 campaign.

Mills finished his individual performances on the weekend in the men’s 200m dash. The freshman flirted with a new personal record but finished just a tenth off of his 22.29s mark set at the Darius Dixon Memorial Invite in the indoor campaign. The 22.39s time did prove the fastest of his young collegiate career in the outdoor season.

In the first field event for the Blue and Gold of the afternoon, Paige Peterson (Alpharetta, Ga.) was the sole contender for the Bucs in the women’s triple jump. The senior produced a leap of 11.57m in her fourth attempt, beating her previous best of the afternoon by .02m after her third attempt of 11.55m.

Genevieve Schwarz (Oak Ridge, Tenn.) finished in the upper third of the group on the women’s side of the 1500m with a time of 4:31.54. Colbie Williamson (Clyde, N.C.) beat her previous best mark in the event by nearly five seconds, finishing with a 4:40.73 time.

Making a debut in the 3000m steeplechase, Myles Stoots (Mobile, Ala.) finished with a top half position in his first performance. The freshman completed the race in a 9:14.04 time.

The Bucs finished their evening on the track with the 5000m run. On the men’s side, Seth Bowden (Maryville, Tenn.) was the lone participant in the event, securing a time of 15:04.86. Kiera Snyder (Klyde, Mich.) and Makayla Shaw (Jonesborough, Tenn.) represented the women in the event, finishing with times of 18:08.73 and 18:32.27, respectively.

Mary Brown (Radford, Va.) concluded the action Friday night in the women’s discus throw. The junior exploded in her second attempt, launching over 12 meters past her first mark to grab a new personal record with an effort of 40.09m. The toss proved more than five feet over her previous best of 38.63m, set last week at the VertKlasse Meeting.

With majority of Saturday’s action being moved to Friday, the Blue and Gold’s only remaining entries on Saturday were for the multiple relays. Due to the rescheduling of events and impending weather, the Bucs concluded their weekend after the second day.