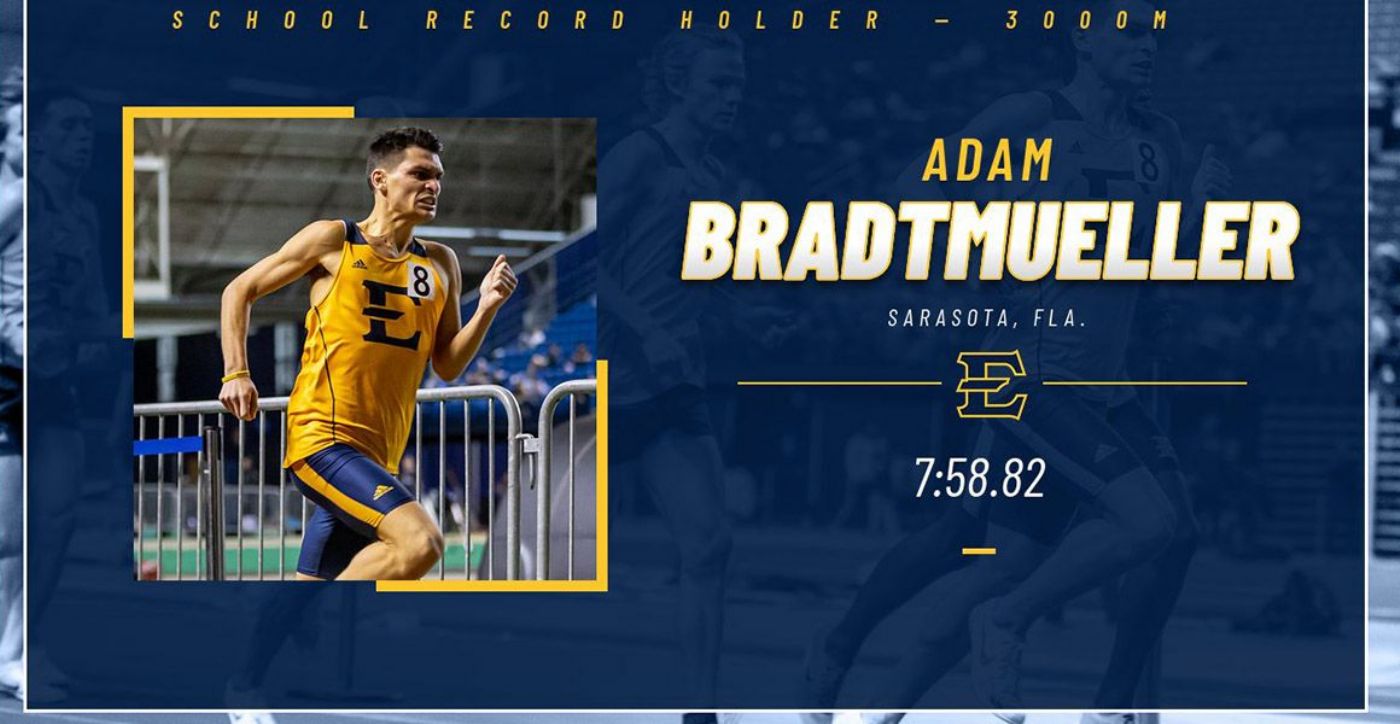 Bradtmueller, who wasn’t even born when Seamus Hynes set the school record in the 3000m with a time of 7:59.92 back in 1990, enjoyed a record-setting day in Nashville. The Buccaneer distance runner clocked in at 7:58.82, breaking Hynes’ mark – which stood for 32 years – by a full second at the Music City Challenge inside the Vanderbilt Multipurpose Complex.

Overall, Bradtmueller finished sixth – and was the first runner from a non-Power 5 program to cross the finish line in the event – among the field of 29 competitors. Bradtmueller was in 18th place early in the race as well as at the midway point, but he started making his charge as he passed five runners between 1500m and 1800m. From there, Bradtmueller moved into the top 10 at the 2100m mark and cruised by four more competitors in the final 900m. Bradtmueller was at 4:01.17 at the midway point and finished the last half in just under four minutes to set the new program record. In the end, Bradtmueller broke his personal best by over 13 seconds, which was previously 8:12.03, set two weeks ago at the Bob Pollock Invitational in Clemson, S.C.

“It’s very exciting to set the school record and run like I did today,” said Bradtmueller. “Since arriving on campus my freshman year, I knew what the record was and it’s been my goal to break that time. We have a lot of great Buccaneer legends that have come through this program – especially the Irish Brigade – and even though I’m not at that level, it feels good to hold this record.

“I want to thank my teammates and coaches for all of their support. Without them this wouldn’t be possible. I heard my teammates throughout the race and they helped push me through the end. It was special to celebrate with them, and hopefully I can carry this momentum into the conference championships in two weeks.”

As Bradtmueller was setting the school record, All-American Lindsey Stallworth (Knoxville, Tenn.) also enjoyed a personal best showing in the women’s 3000m in the Music City on Saturday. Stallworth shaved nearly four seconds off her previous mark as she finished with a time of 9:28.73 en route to placing 13th in the field of 30 runners. In the women's unseeded 3000m, Kiera Snyder (Clyde, Mich.) ran a PR with a time of 9:53.84, finishing 10th.

Up in Virginia, other members of the ETSU men’s and women’s track and field team were wrapping up competition at the Darius Dixon Memorial Invitational, held inside the Liberty Track Complex.

In the women’s 200m, Lindsay Cooper (Charlotte, N.C.) and Mekayla Brown (Elgin, S.C.) each posted personal bests in the event. Cooper clocked in at 25.53 and Brown finished in 25.95. Brown also competed in the triple jump on Saturday where she placed fifth with a mark of 11.39m.

Tya Blake (Lynchburg, Va.) made her first collegiate appearance in the triple jump and placed ninth with a mark of 11.15m.

Abbey King (Greeneville, Tenn.) set a new personal best in the women’s high jump with a leap of 1.54m, while for the second straight day, Rebecca Avery (Jefferson City, Tenn.) had another PR – this time in the shot put. Avery finished with a mark of 10.16m, besting her previous throw of 9.41m, set last weekend at the Buccaneer Invitational.

The Blue and Gold will take next weekend off before gearing up for the Southern Conference Championships, which will be held Feb. 26-27 at VMI.