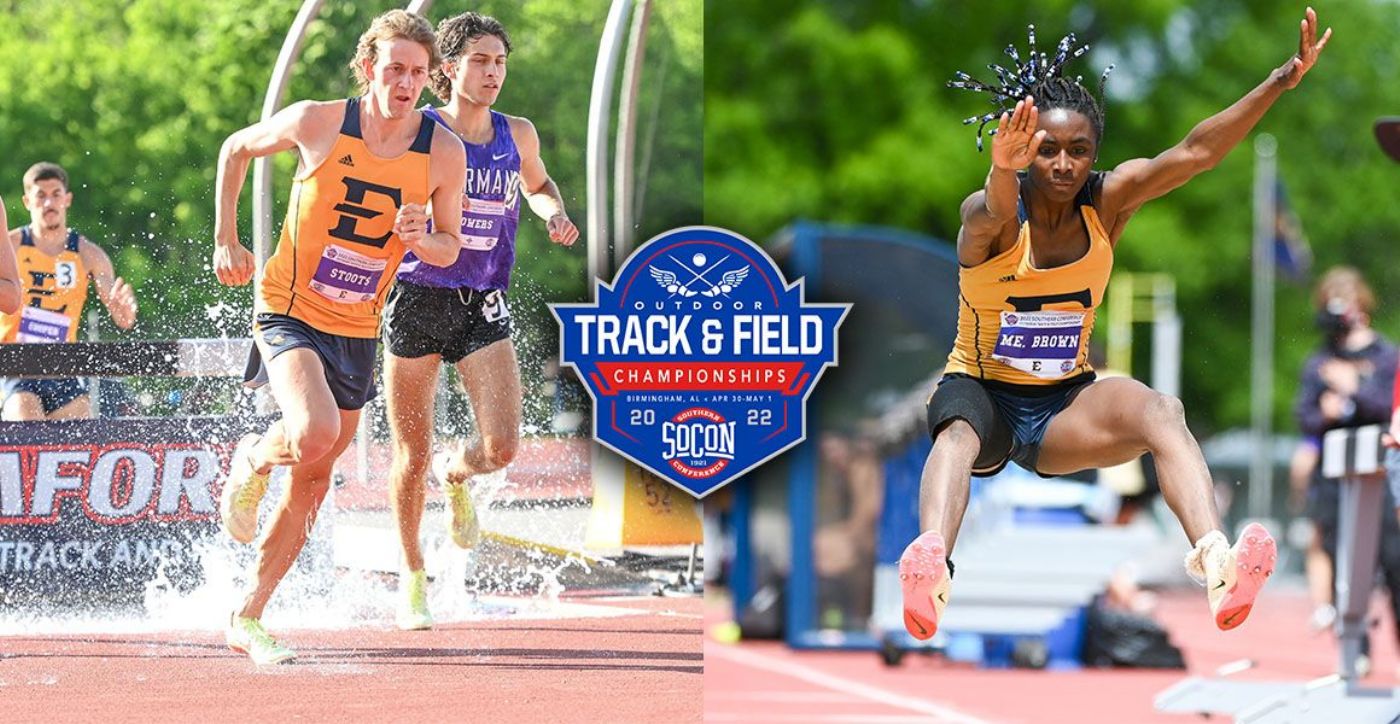 BIRMINGHAM, Ala. (April 30, 2022) – The ETSU men’s and women’s track and field teams had a productive opening day at the Southern Conference Outdoor Championships, which got underway Saturday from Shauna Yelton Field, located on the campus of Samford University.

Overall, the Blue and Gold recorded five podium finishes on Saturday, while advancing 24 into the finals for Sunday’s events.

BUCS WHO SCORED POINTS ON SATURDAY

Following the opening day of competition the Buccaneer women sit in second place with 33 total points, while the men collected 22 points, putting them in a tie for fifth.

Samford sits atop the team leaderboard on both the men’s and women’s side. The Bulldog men totaled 82 points with Furman sitting in second with 32 points, Western Carolina in third (31) and The Citadel fourth (27). ETSU is tied for fifth with VMI.

Samford’s women’s team bagged 85 total points on Saturday, while ETSU’s women are one point ahead of Wofford (32) and seven points ahead of Western Carolina (26).

On the women’s side, Mary Brown (Radford, Va.) gave the Blue and Gold eight points with her second-place performance in the hammer throw. Brown set a personal best with a distance of 50.65, marking her best finish in the event at the conference championships. Joining Brown with a scoring effort in the event was Rebecca Avery’s (Jefferson City, Tenn.) seventh-place showing. Avery also set a PR with a distance of 45.17m, giving her two points in the event.

Mekayla Brown (Elgin, S.C.) also gave the Bucs eight points with her second-place finish in the long jump. Brown just missed a PR with a leap of 5.70m and was edged by Western Carolina’s Makaila McIntyre for gold as she finished with a mark of 5.73m.

Freshman Diana Romero-Barba (Tepatitlan de Morelos, Jalisco, Mexico) earned the Blue and Gold four points with her fifth-place finish in the pole vault (3.41m), while Julia Foote (Franklin, Tenn.) earned two points in the 10,000m. Foote posted a seventh-place finish with a time of 39:22.81, marking her first collegiate appearance in the event.

Rounding out the Buccaneer scoring on the women’s side were Makayla Shaw (Jonesborough, Tenn.) and Shila Kapaya (Knoxville, Tenn.) in the steeplechase. Shaw earned bronze by clocking in at 11:13.81 and Kapaya placed sixth (11:46.96). The duo combined for nine points in the event, courtesy of Shaw setting a PR.

Stoots and Cooper combined for 14 points in the steeplechase. Stoots won silver with a time of 8:57.93 and Cooper earned bronze (9:07.72), marking personal bests for the pair of Buccaneer runners. Samford’s Ben Garner won the event with a time of 8:55.55, setting a facility record.

Below are the Buccaneers who advanced to the finals in their respective events on Saturday.

A pair of local products, Britney Griffith (Kingsport, Tenn.) and Abbey King (Greeneville, Tenn.), are both representing the Bucs in the heptathlon this weekend. Griffith totaled 2364 points and King posted 2333 points on Saturday.

Men
We had a very good first day garnering podium finishes in the steeple, and earning points in two others.  Some really smart racing by Myles and Gavin earned them their medals.  Our throwers did well scoring in two events with hard work and perseverance paying off for Zach and Noah. We qualified for nine spots in today’s prelims and we have a chance to exceed expectations.  We need to find a way elevate our competitive effort in the finals.

Women
We had a strong day earning three podium finishes and earning 15 spots into tomorrow’s finals.  Mary had a great day finishing runner-up with a nice personal best mark.  Mekayla always brings her best stuff to conference championships and today was another example of that.  Makayla Shaw did a great job in the steeple earning a bronze medal and her first podium finish of her career.  Congrats to Rebecca, Shila, Julia and Diana for adding to our team totals as they were first time scorers for the Bucs in Southern Conference competition.  We will have quite a battle tomorrow in the team race where we have a chance to finish in the top two.  As always, it’ll come down to head-to-head competition in almost every event.

Sunday’s events will be video streamed on ESPN+, while live scoring can be accessed via XPressTiming.