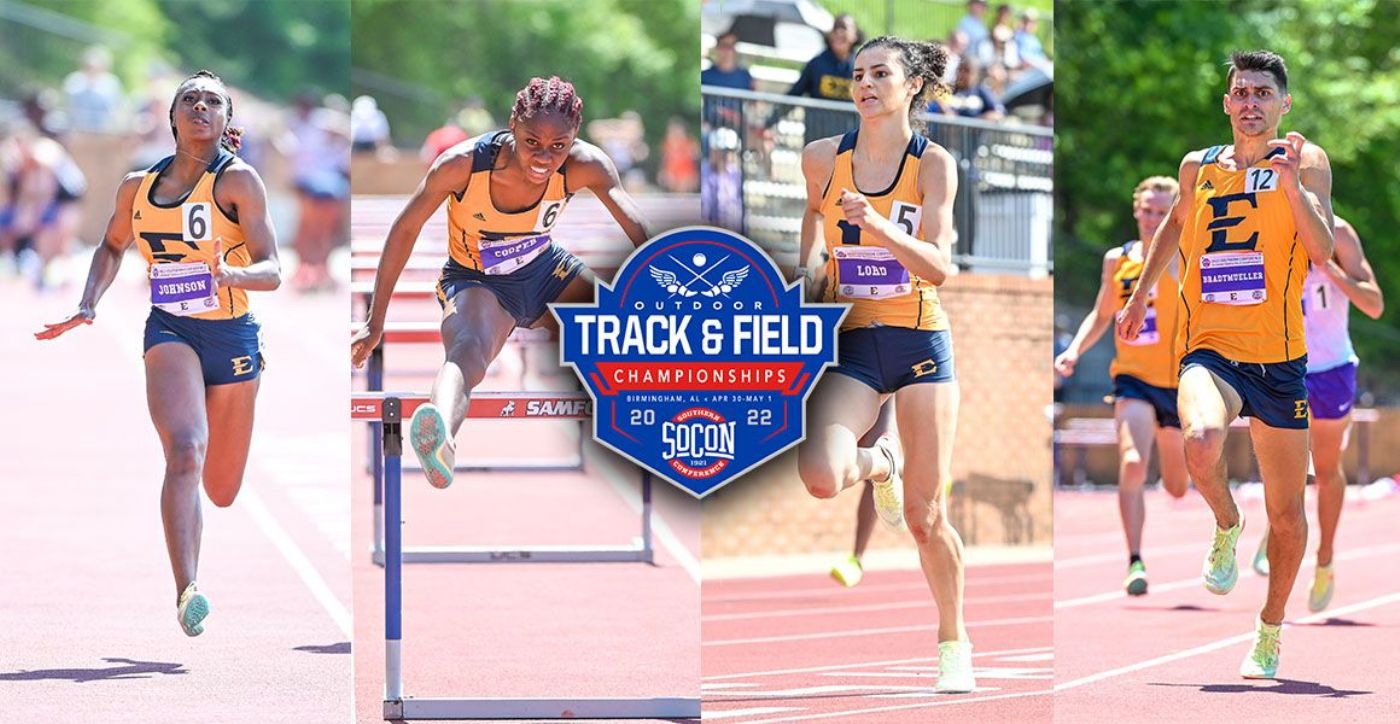 Four gold-medal performances, a first-ever conference champion in the women’s 400m hurdles, 13 podium finishes, and a runner-up finish by the Buccaneer women highlighted a thrilling Sunday at the Southern Conference Outdoor Track and Field Championships as the final events were contested from Shauna Yelton Field, located on the campus of Samford University.

Samford won for the third straight season after collecting 224 points, while Western Carolina finished with 133 points, Wofford at 117 and Furman with 94.

After finishing seventh a year ago with 41 points, the Bucs doubled that point production en route to finishing fifth with 87 points. In total, 10 different ETSU athletes earned points for the Blue and Gold on Sunday with 51 of those points coming via the 800m, 1500m and 5000m.

Lindsay Cooper (Charlotte, N.C.) made history on Sunday as she became the first-ever ETSU female student-athlete to win a conference championship in the 400m hurdles. In what was one of the most exciting finishes of the weekend, Cooper won by a nose over Mercer’s Ariel Raggs with a personal best time of 1:00.33. Raggs finished second in 1:00.36.

Cooper also earned a silver medal in the 100m hurdles when she clocked a personal best time of 13.74, while the Charlotte, N.C. native also ran a leg on the champion 4x400m relay.

Lindsay Cooper becomes the first ETSU female student-athlete to win the @SoConChamps in the 400m hurdles as she sneaks by for 🥇 with a PR of 1:00.33! #ETSUTough pic.twitter.com/J3XiuIz4kE

Adam Bradtmueller (Sarasota, Fla.) was the first Buccaneer to win gold on Sunday as he charged Furman’s Carson Williams down the stretch to secure his first career individual win at the outdoor championships.  Bradtmueller, who won gold in the 5000m at the indoor meet back in February, set a facility record and PR in the event by crossing the tape in 3:44.55 – marking the Bucs’ first SoCon gold medal in the event since Brad Yewer won gold in 2003. Overall, Bradtmueller is just the fourth ETSU runner to win the 1500m at the SoCon meet and the eighth Buccaneer to accomplish the feat in program history.

What a finish by the Buccaneer veteran in the men's 1500m as he kicked it into another gear down the stretch to pass Furman for the 🥇!

Making her first appearance at the SoCon Outdoor Championships, Nicole Johnson (Chattanooga, Tenn.) wasted little time making a name for herself. The Buccaneer sprinter, coming off her third straight gold medal win in the 60m at the indoor meet, secured gold in the 100m on Sunday with a PR of 11.66. Johnson just missed breaking Jenny Knox’s school record of 11.63, while the Chattanooga, Tenn. native joined Leisa Moulton (1996) as the only two Buccaneers to win gold in the event at the SoCon Championships. Johnson, Knox (2007 ASUN) and Moulton are the only three Buccaneers to ever win the 100m at a conference meet.

Johnson was busy on Sunday as she also ran a leg in the 4x400m relay that won gold as well as in the silver-medal winning 4x100m relay. The Buccaneer sprinter also qualified for the finals in the 200m.

Johnson sets a PR and nearly breaks the school record en route to capturing 🥇 in the 100m with a time of 11.66!

She's the second Buc to win the @SoConChamps in the 100m and first since 1996! #ETSUTough pic.twitter.com/nA9DGelQov

Lord got the Bucs off to a first-place start in 53.93 seconds, but Wofford took the lead on the second leg, before Burkhart closed the gap with a time of 57.41 on the third leg. From there, Cooper closed in fury as she passed Wofford and finished with a time of 55.98 on the final leg, marking ETSU’s fifth all-time win in the event at the SoCon meet.

For the first time since 2018, the Bucs have won 🥇 in the women's 4x400m relay at the @SoConChamps as Lindsay Cooper had a strong closing finish ... The Bucs posted a time of 3:48.68! #ETSUTough pic.twitter.com/P1e1rVFGsI

The women battled throughout the two days of competition and earned their second-place finish.  We had so many highlights it's hard to single out any one performance or individual.  But our conference champions should be talked about first, and all three were impressive wins.  Nicole Johnson solidified her position as the top short sprint champion by adding her 100-meter win to her indoor title. Lindsay Cooper has made great improvement competitively over the past two meets and was not to be denied in a hard-fought battle in the 400-meter hurdles.  Added to that was her silver medal in the 100m hurdles.  The 4x400m relay team won an exciting race to finish off a very successful meet.

The story behind the scenes can be highlighted by so many other podiums and scorers that I really don't want to leave anyone out. Four places in the 800m led by Jessica Lord's second-place finish garnered 18 points. Genevieve Schwarz finished third in the 1500 with a big personal best and added a fourth-place in the 800. Makayla Shaw earned her first ever podium finish in the steeple, which she just started to do this year. Although, not a top three finish, Julia Foote started the scoring with a seventh in the 10k.  What's most impressive is it was her third race of the school year and her first 10k ever. She has fought through some injuries this year and showed a lot of maturity in embracing a difficult challenge and succeeding. Our relays did well, and we were close in the 4x1 and made a lot of progress.

In the field we were equally impressive with some breakthrough performances. Mary Brown had a great meet with her two runner-up finishes. Mekayla Brown earned two podium finishes in the long and triple jumps and surprisingly scored in the high jump without having competed in that event in two years.  Anna Moore made some real progress by earning two very valuable eighth place finishes as she continues to get better.

The men's team overachieved and had some fantastic performances.  We only had 16 men compete and weren't too far out of fourth-place.  Every person who scored performed beyond expectations.

Adam Bradtmueller claimed a conference championship in what's considered his “second” event, the 1500m. He ran a very nice strategic race and won convincingly. He was able add two valuable team points in the 5000m.

Myles Stoots and Gavin Cooper are quite possibly the two most improved athletes we have.  Both had nice personal bests to earn podium finishes and then came back and scored in the 5k.

It was nice to get half the places in the 800m, led by Miguel Parrilla's runner-up finish, where he had a huge jump bypassing 1:49 dropping into the 1:48's.  Phelani has made the podium in every conference 800m he has contested. I can always count on him giving his best competitive effort. Evan Guzman was one of the few guys in the meet doing the 1500/800 double. He ran some gutsy races to score in both and then run his fastest 4x4 split of his career. Josh Krafsur, ran a personal best to make the final to then finish fifth and anchored the 4x4 teaming up with Miguel, Phelani, and Evan to finish fourth.

Nolan Johnson was as nice a surprise as anyone in the meet.  He's struggled with injuries a good part of the year but saved his best for the most important meet of the season to score in the 100m and 200m.

Zach Fejeran and Noah Shelton found a way to score in three of the throwing events, and as seniors had their best conference championship of their careers.