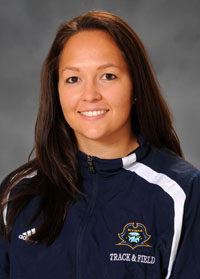 2010-11: Top indoor finish of the season was a fourth place showing in the weight throw at the Liberty Open with a mark of 15.13m...Earned a career best mark of 15.47m in the weight throw at the Atlantic Sun Indoor Championship...Earned a career best mark in the shot put during the A-Sun Indoor’s with a 12.98m toss to Finish the event with a seventh place showing.