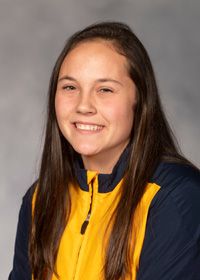 Prior to ETSU: Graduate of Daniel Boone High School...a four year letter winner in track and field over her high school campaign...set a personal record in her junior year, reaching 10'6" on the pole vault...holds the indoor and outdoor record in the pole vault at Daniel Boone...was a conference champion her junior year, placing sixth in the indoor state championships and third in the outdoor championships...placed fourth at state in both her sophomore and senior seasons.