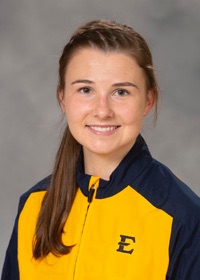 2019 Track & Field: Competed in three indoor meets running distance events…placed seventh in the VMI Team Challenge (Jan. 26) with a time of 19:45.68 in the 5000m run to score for her team…matched her indoor total with three outdoor meets…placed a best fourth place in the 2019 Catamount Classic (April 12-13) with a time of 19:24.90 in the 5000m…earned a spot on the SoCon Honor Roll…a SoCon Academic All-Conference selection in indoor and outdoor…a recipient of the SoCon Commissioner’s Medal

2018 Track & Field: Competed in four distance runs during indoor season before hitting her stride in outdoor — competing in four 5K's and one 3K ... Set both of her collegiate personal records to open outdoor season, finishing with a time of 19:05.71 in the 49er classic 5K and a 11:59.05 time in the following week's 3K at the Weems Baskin Relays ... Finished third at the Catamount Classic 5K in Cullowhee, N.C. for her career-best finish, competing as the only freshman in an 11-athlete field ... Placed fifth in the Tri-Star Classic 5K at Science Hill High School.

Personal: Born on August 24, 1998... daughter of Rick and Janet Bruce... majoring in Health Sciences (Pre-Medicine) at ETSU...Bruce's cousin, Sean Conway, played football as an offensive lineman for Western Kentucky from 2010-2013...Bruce received the 2017 Honor of Sedes Sapientiae, which is the highest honor Knoxville Catholic High School confers on its graduating seniors.