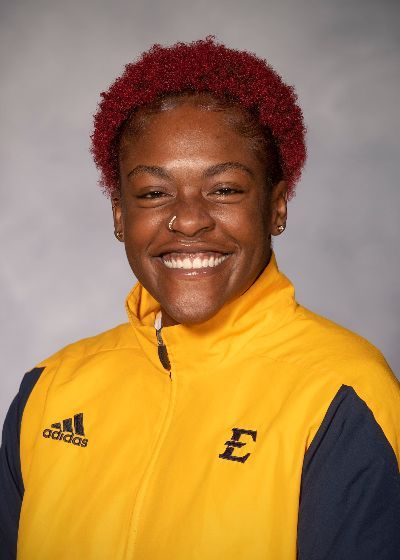 2019 Track & Field: Opened the season with fourth place finishes in the weight throw and shot put in the ETSU Track and Field Invitational (Jan. 11-12)…competing in three meets in the indoor campaign, set a personal record in the weight throw of 18.49m to place second in the Southern Conference Indoor Championships (Feb. 23-24) while scoring for her team in the shot put (13.31m, 5th)…set a personal record in the discus at the 2019 Catamount Classic (April 12-13) for a fourth placed finish…scored a PR in the hammer throw (47.09m) on her way to a fifth place finish in the SoCon Outdoor Championships, grabbing a fourth place finish in the shot put with a 13.56m toss.

2018 Track & Field: Competed in four indoor and six outdoor meets as a true freshman ... Won her first career event as a collegiate athlete, throwing an even 13.00m mark in the shot put at the ETSU Track & Field Invitational ... Set her personal record the following meet at the VMI Team Challenge with a 13.81 throw to win the event ... Scored eight points in the weight throw at the SoCon Indoor Championships, tossing a 17.62m for a PR ... Also scored eight points in the SoCon Outdoor Championships during the shotput event with a mark of 13.26m ... Set two PR's at the conference outdoor meet in the hammer (44.71m) and the discus (38.93).

Prior to ETSU: Attended Hardin Valley High School where she lettered four years as a thrower on the track and field team for coaches Bryan Brown and Acelyn Halverson...recorded a 41.11 in shotput and a 90 in discus...was awarded the MVP award in the 2014-2015 season and earned all-state and MVP honors from 2015-2017.

Personal: Born on May 1, 1999... daughter of William Buxton and Myia Upton... majoring in Exercise Science at ETSU...plans to pursue a career in occupational therapy after graduation.