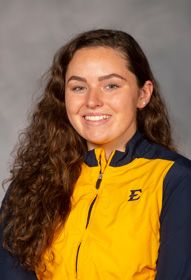 2019 Track & Field: Threw the weight in four meets in the indoor season…opened her season with a sixth place finish at the ETSU Track and Field Invitational (Jan. 11-12) with a mark of 14.59m…scored for her team in the VMI Team Challenge (Jan. 26) with a 15.08m, seventh place toss…bested her season mark in the weight throw with an eighth place, 15.32m throw at the Buccaneer Track and Field Invitational (Feb. 1-2)…earned a spot on the SoCon Honor Roll.

2018 Track & Field: Competed in five indoor and seven outdoor meets, two more each than the previous season ... Set four of her five personal bests in 2018, two of which came in conference championship meets ... Scored in the hammer throw at the SoCon Outdoor Championships with a mark of 48.73 to place sixth and finish in the top third ... Built her way to a new weight throw PR, eclipsing 14.00m in her final three tosses of the indoor season to end with a 14.70m mark in the SoCon Indoor Championships ... Set two outdoor PRs in the javelin (22.35m) at the Catamount Classic and in the discus (34.13m) during the ETSU Tri-Star Classic.